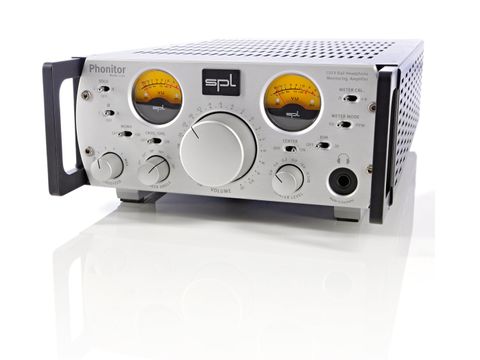 The best headphone amp we've heard. It makes working with cans a real possibility and a pleasure.

There are some fantastic sounding headphones out there, but one major problem stands in the way of using them to mix.

Our brains judge the position of things by when they arrive at our ears. A sound to our left arrives at the left ear first, but our right ear hears it too, just a little delayed and a little quieter.

Take away that crossfeed information and we get confused. That's what happens in headphones - they isolate us from the acoustic environment, which makes frequency response very consistent, but takes away our ability to judge spatial information.

That's why mixing on headphones can be disorientating and rarely translates well to speakers.

So, enter the Phonitor, the latest in a long line of innovative devices from German company SPL. This deceptively simple unit is designed to solve the inherent problems of mixing in cans with very high quality audio circuitry and some novel control features.

Our first impression on taking it out of the box was that we were looking at a very high quality piece of lab gear. With its vented metal casing and retractable legs, it's reminiscent of a small oscilloscope.

Connections are on the back panel and consist of two XLR inputs and outputs and an IEC mains input. The power and earth lift switches are also located at the rear.

The front panel has two retro-looking meters for left and right, eight switches, three small stepped knobs that control the stereo image and a big continuous volume control. The headphone output is one stereo 1/4-inch jack on the front.

The first thing we did was hook the Phonitor up to a good-quality CD player and listen to it as a straight headphone amp.

The results are pretty stunning. We plugged in our old Hear Safe Big Phones (specially designed closed cans to minimise spill when recording), and we've never heard them sound better.

Switching over to our Sennheiser HD580s, which are our favourite 'listening' cans, we were even more impressed. Incredible depth and clarity, not a hint of distortion and detail by the bucketful.

The Phonitor utilises SPL's 120v technology, which it developed for its mastering systems. The principal is based around the fact that higher voltages in audio circuits give increased headroom, lower distortion and enormous bandwidth.

With users such as Bob Ludwig at Gateway and Simon Heyworth of Super Audio this technology is very much at the top of the tree. Hardly surprising that it sounds this good then!

Beyond the astonishing quality of the amplifier itself, the real treat with the Phonitor are those three extra knobs on the front panel.

The two knobs on the left are labelled Crossfeed and Speaker Angle. What the Crossfeed control does is to feed some of the left signal to the right, and the right to the left, utilising tiny delays so that the resultant stereo image remains more natural, allowing our brains to decode it successfully.

Speaker Angle enables you to further control the stereo width of the signal so that you can match the width you prefer to hear from your speakers.

These controls are rotary switches, so once you've found the setting that suits you it's possible to return to it every time.

The third control is called Centre Level and enables you to adjust the 'false centre' of the stereo image. When you use the Crossfeed and Speaker Angle, a side effect is that the centre of the stereo image gets boosted. Centre level lets you control this so that it accurately matches what you hear through your speakers.

I took the Phonitor to a three-day overdubbing session taking place in the living room of a country house. I was in the room with the musicians so I couldn't monitor on speakers, and as it was all acoustic, even setting up was tricky due to feedback.

Our normal approach would be to cobble together what I hoped was the sound we wanted, record a bit and then play it back to check it.

With the aid of the Phonitor we were able to accurately gauge what we were recording, both in terms of EQ and ambience, and have it translate fantastically well onto speakers. It made the whole process much simpler and a lot quicker.

SPL's claim that the device helps to reduce ear fatigue was certainly borne out by our experience over those three days. It was a pleasure to be listening to headphones and not speakers, which makes a change.

Finally, we tried a couple of mixes on it back in our studio. Working on the drum and bass sounds wasn't that easy, as we missed the physical reaction of the low-end in the room. We did a fair amount of that on speakers, but when it came to balancing and all the finessing, Phonitor worked great.

Even setting up spatial effects like reverbs was simple, and the whole thing translated well onto speakers.

This is a really high-end product. It's beautifully built, sounds fantastic and enables you to work in a way that you've never been able to before. For us, the combination of innovation and quality makes it worth every penny.

For those with a smaller budget, SPL has put the Crossfeed technology into its new 2Control monitor controller, which is considerably cheaper. So there - you even have a choice!