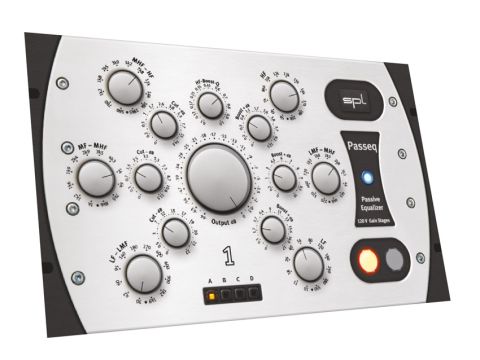 Don't be scared by the unconventional layout - this is a seriously impressive tool.

The original hardware Passeq is a feat of engineering that is physically and financially hefty (4U, 12kg and £3,300). For those of us with small budgets/racks SPL have released the Passeq plug-in (VST, AU and RTAS) as part of their Analog Code range.

But once the license is on your iLok what do you get? The simple answer is a big knob-laden stereo EQ. Now let's look at the more detailed picture.

The Passeq layout is initially intimidating, but the essential pattern is sensible and quickly becomes second nature. The frequency bands are split with the cut filters to the left of the attenuator and boosts to the right.

Instead of shared cut and boost frequencies (à la Pultec) the Passeq has separate frequency selections for cut and boost to enable more flexibility and range in the resulting S-curves.

There are three cut ranges (LF-LMF, MF-MHF and MHF-HF) and three for boost (LF, LMF-MHF and HF). The LF (cut and boost) and MHF-HF cut filters are shelving types, while the MF (cut and boost) and HF boost exhibit peak filter responses. The HF boost also has a Q control which ranges from 1.0 (1.4 octaves) to 0.1 ( 7 octaves), enabling broad pseudo-shelving boosts as well as parametric-style peaks.

Though a tad complicated at first, with time and a read of the informative manual the Passeq can far exceed the relatively restrictive capabilities of parametric EQ designs.

No gain, no pain

Like the hardware Passeq, this plug-in only features an attenuator for gain control. This has its reasons in the real world (noise floor, linearity and amplifier headroom) and may well be true in the virtual one (we don't know what goes on in the Analog Code), but it is also true that nine times out of ten the EQ output signal rarely needs more gain - just attenuation.

Where the plug-in deviates from the hardware is the inclusion of four recall buttons, stereo channel linking and M/S (Mid/Side) operation. There is also a space saving Passeq Single which only displays one set of controls for stereo-only operation.

Unlike the Pultec-style passive EQs, the Passeq does not trade on a character sound but instead oozes subtle yet powerful control without creating overt non-linearities. There is a distinct lack of (bad) phase-shift characteristics even at extreme settings, though the attenuator may be needed to reign in the gain before overload.

We don't want to give the impression that the Passeq is a clinical-sounding EQ as the effect it has is very pleasing, especially on wide frequency band material. None of the bands exhibit a sharp Q, keeping the sound non-resonant, and yet with careful cutting and boosting we have been able to eradicate most problem frequencies from mixes and masters while still having enough remaining bands to really highlight the strengths of the input material.

The sheer range of frequency sculpting is as absorbing as it is pleasing and makes the Passeq a definite contender for our favourite mix buss/mastering EQ. This is furthered by the addition of (internal) M/S processing.

Being able to chisel away at the LF-LMF range of the centre image while enhancing the stereo HF makes mastering a far easier and more creative process. Our one suggestion is a copy and paste facility between the four recall slots to speed up A/B comparisons.

In a world awash with Pultec PEQ1A and Neve 1073 clones it's rare to find something that stands out. SPL found a new way to skin a cat with the hardware Passeq and have successfully brought a digital version to life that offers serious quality for mixing, mastering and more at a very reasonable price.