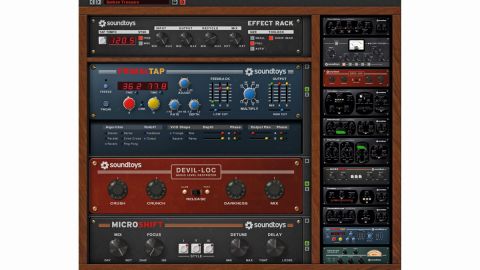 There are 18 compelling reasons to buy Soundtoys 5, and none not to - the leading effects bundle reaffirms its classic status.

New releases from Soundtoys are infrequent but highly anticipated, and routinely hailed as future classics.

It's been five years since the last major version update to its flagship effects bundle (Soundtoys Native Effects V4), though, so can Soundtoys 5 (VST/ AU/AAX) stand out in today's busy market?

Comprising all 18 plugins in the current Soundtoys catalogue, one of them a virtual rack within which to house the others, its prospects look good on paper, but let's go through them one by one, starting with a very quick run-down of those we already know and love from v4.

FilterFreak 1 and 2 are go-to filter plugins for many producers, offering such delights as rhythm modulation sequencing and a convincing Analogue mode. PanMan draws inspiration from auto-panning pioneers like Audio & Design's PanScan and is itself now a recognised industry standard.

EchoBoy is a modern studio staple, taking its lead from a range of hardware legends including the unforgettable MemoryMan. Tremolator offers a taste of Fender's Vibrolux amp and others, but goes further, enabling powerful sequenced gating. Crystallizer hints strongly at Soundtoys' Eventide H3000 heritage (the company founders designed it, essentially), slicing up audio and pitchshifting the consequent chunks.

Decapitator was the first saturation plugin to tempt many big-name producers away from their Ampex 350s, EMI TG Channels, Neve 1057 preamps and Thermionic Culture Vultures. And PhaseMistress takes iconic boxes like Mutron's BiPhase and adds 24-stage phasing, relegating a number of proud pedals to a box underneath the SSL.

Following the release of Soundtoys Native Effects v4, the Soundtoys catalogue has continued to expand, and all nine plugins added since 2010 are also included in the v5 bundle.

Devil Loc Deluxe (and smaller sibling, Devil Loc) are based on Shure's M62V (aka Level Loc), a late-60s vocal compressor subsequently reinvented as a drums squasher, so we won't get into it again except to say that it's great for heavy and characterfully distorting compression.

Radiator recreates the sound of Altec's 1567A tube mixer, immortalised on countless Motown hits. The original's Treble and Bass EQs are present, as is the Gain control, delivering over 90dB of boost (with optional authentic noise), and the Mic/Line input selector.

Radiator is perfect for adding character to just about anything you throw through it - transparency certainly isn't the name of the game.

Ever wondered how some 80s synth patches sounded so lustrously wide? They were probably mixed using the Eventide 910, Eventide H3000 or AMS DMX 15-80S, employing the trick of pitchshifting one channel up a little and the other down, then delaying the timing of either.

Soundtoys MicroShift condenses this technique down to two main controls, Detune and Delay (offsetting the timing of the L/R signals), and three model switches, calling up the sounds of the aforementioned hardware. Beyond that, Focus progressively removes low and mid frequencies from the effect.

The Drive dial adds grit to the end product, and the Dry/Wet knob allows parallel processing. The resulting range of effects is awesome, and the MIDI control feature lets you pitch the signal via MIDI input, turning the plugin into a robotic voice player (in Robot mode) or harmonizer. LittleAlterBoy can do wonderful things to rhythmic sources, too.

A VCO modulator is independently applicable to each delay line for lush chorusing, while the Freeze function captures a chunk of signal for manipulation. It all conspires to deliver everything from flanging and pitch wobbling to ring modulation-style effects. PrimalTap is one of the best and most distinctive delay plugins that money can buy - alongside EchoBoy!

In addition to that lot, three cut-down 'Little' versions previously used as marketing freebies - LittleRadiator, LittleMicroShift and LittlePrimalTap - have been thrown in, too.

It's testament to the quality of Soundtoys' algorithms that even its most venerable plugins - now over a decade old - have stood the test of time, and the ten new additions make what was already an essential collection of effects for producers in all genres even more so, despite their odd idiosyncrasies and sometimes fiddly interfaces.

We've often heard it said that it's hard to get a bad sound out of a Soundtoys plugin, and that remains very much the case with version 5 of its amazing bundle.