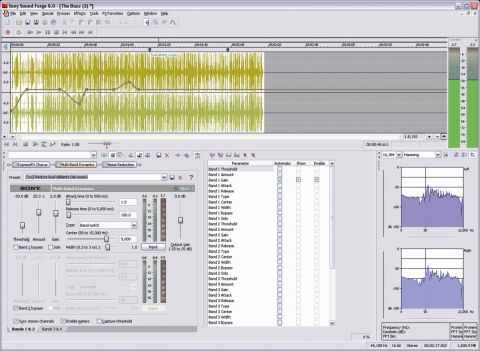 Sony's SoundForge 8 bundle is as good an editor package as you'll find for PC.

Without wishing to sound ageist, it could be said that an application like SoundForge is a little long in the tooth to warrant one's attention, let alone any cash.

However, since its purchase by Sony (along with Acid and Vegas), it's started to look more and more like the player it always should've been.

It's always been well reviewed purely on its ease-of-use, but that isn't always enough. Sometimes we need the bells and whistles to get our attention (even if they remain untouched).

Version 8 continues the ongoing process of enhancement (read: value for money). And the persistent requests from users are finally being heard.

CD Architect, although back on the market for some time, comes free with SF8 (so that'll save you 79 quid) and support for VST plug-ins is finally included.

SoundForge is an audio editor and recorder for stereo and mono files (including the audio element of many AV file types). It's not a multi-tracker and it's certainly not a sequencer. However, it does support, its sibling Acid's loop format.

Perfectly suited to anyone recording, editing and preparing audio - from music and sound effects to speech and web content - it's non-destructive (with undo beyond the point you hit save), and is very easy to get to grips with.

It comes with a package of over 40 DirectX plug-ins, including its Acoustic Mirror impulse reverb. Free in the box you'll also find version 2 of Sony's Noise Reduction plug-in.

All plug-in parameters can be automated (with full preview) prior to rendering your new file. For the recordists amongst us, you can now automate recording via threshold and time code and also find a bunch of spectrum analysis tools, noise generators and a clipping detector/marker.

It's no secret that SoundForge's lack of VST support has baffled its users for longer than we care to mention. With VST now on board (you can choose two plug-in folders in the preferences), they've gone one step further and brought in ASIO driver support too.

Other welcome improvements include a much more customisable workspace (with support for Windows XP themes), custom key commands and mapping plus an audio scrub control.

For many users the application scripting and batch conversion features may well be the most welcome additions. Both of these are simple to use and make repetitive tasks much easier.

In the case of scripting, SF8 comes with a bunch of ready-made scripts such as 'add markers', 'extract CD' and 'crop and fade'. They can be edited in the scripts window, or if you know your scripting languages (Jscript, Visual Basic .NET or C#) you could write some from scratch!

Batch conversion is probably a more widely seen option - here SoundForge allows you to apply the same off-line process or chain of processes to many files.

It's great for normalizing or converting file types, but it's also capable of much more complicated effects chains.

In this day and age, software manufacturers are no doubt trying to avoid spending any money developing packages for a format that's seen better days. But if you view CDA more as a mastering tool, maybe it makes more sense.

Packed with a host of features (many of which would make WaveBurner users green with envy), it's one of the few really decent CD Audio mastering packages on the market.

Although a separate application, it has in the past been an integrated part of SoundForge. Some of that integration now returns with the option to export a file or files directly to CDA.

This certainly saves the hassle of saving and re-opening, and in practice makes work flow much quicker.

If you're a cross-platform user, SF8 is one of those programs you'll really wish you could port to my Mac (preferably along with CD Architect). It's not a fancy program, but does what it's meant to, and does it quickly and simply.

New versions of SoundForge rarely feel groundbreaking, but this one certainly fills in a few gaps. It's fair to say, though, that a few things remain missing.

Multi-channel audio support would be nice, as would a slightly broader array of file formats. It would be good to see direct support for the Apple related AAC/ MPEG-4 format to compliment Sony's own 'perfect clarity audio'. In time multi-channel audio support will probably make its way into SoundForge, but we were a little surprised that the Main Concept MPEG encoder still costs extra.

Isn't it also about time the Sony Oxford plug-ins started making an appearance in other Sony software? As it stands, though, at £199 (including CD Architect and Noise Reduction 2.0), SF8 seems as good value for money as it's ever been.