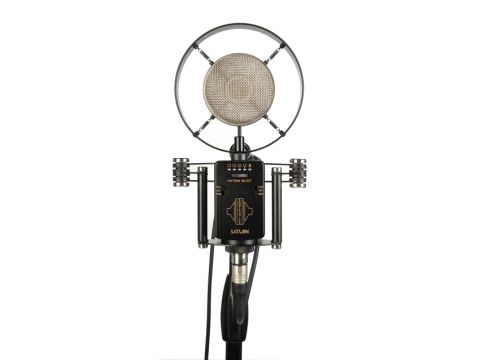 Saturn delivers on Sontronics' claims. It's a superb all-rounder if one mic is all you're looking for.

Since its launch in 2005, UK mic company Sontronics has expanded its range to include a collection of different types - some featuring quite eye-catching designs. The company's latest, the Saturn, will certainly catch anyone's eye, with its retro look reminiscent of the huge RKO radio announcement mics of yesteryear.

So what's the thinking behind it? Sontronics' founder, MD and designer Trevor Coley told us that over the last few years he has been asked the same question countless times from end users: "I need just one microphone that is good for everything, which one should I buy?".

The usual answer to this one has to be that there is no such microphone. While all mics will record audio, they are like tools in a toolbox - specific ones for specific jobs - and while it's true that you may be able to bang a nail in with a spanner, you'd get better results by using a hammer.

Nevertheless, the question set Trevor thinking and led him into more research in the quest for a mic that could be all things to all users. The result of this research is Saturn, a multi-pattern condenser microphone. Trevor tells us that the microphone has been in development for over two years and during the last twelve months it has been beta-tested by some of the top names in the business, including producers Flood, Alan Moulder and Paul Staveley O'Duffy.

Saturn comes with a smart aluminium carrying case with combination locks. There are two components to it: the microphone itself and its tightly engineered suspension cradle for attachment to a stand. The most striking aspect of the mic is the large circular silver grille/capsule - almost 3.5 inches across and flexibly suspended in the centre of a 6-inch diameter metal ring by four small springs.

The mic's diaphragm is connected to the rest of the electronics (inside a rectangular box connected to the metal ring) via wiring inside a spring ensuring that the whole capsule is free-floating. All of the switching options reside on the front panel of the box.

There's a pad switch with options of 10dB or 20dB of attenuation if you need it, plus a hi-pass filter that lets you roll off the bottom end either below 75Hz or below 125Hz with a 12dB/octave slope. The other switching option lets you select one of five polar patterns - omnidirectional, subcardioid, cardioid, hypercardioid and figure-of-8. This is carried out with a knurled selector wheel which scrolls through the various options - each pattern is graphically displayed on the mic's surface but also has an associated blue LED that lights up when that particular pattern is selected.

The suspension cradle is a solidly-built affair. The microphone screws firmly into a baseplate that has two vertical columns at each side. These columns attach to the horns of a crescent-shaped section via an assembly that includes plenty of rubber to ensure that it is isolated from shock. The crescent section attaches to a mic stand via a standard angled joint that has adjustment through 180 degrees via a finger-tightened knob

On a male lead vocal using a cardioid pattern and 75Hz roll-off, the Saturn captured the performance with plenty of clarity and no obvious deficiencies anywhere in the frequency range. There is a bright, somewhat forward quality to the sound - nice and airy but without harshness.

The frequency response graph shows a reasonably flat response up to 2kHz with a gentle slope up to a plateau around 7kHz to 9kHz starting to drop off steadily from 10kHz to 20kHz. This increased high frequency response is no bad thing for vocal recording, helping the voice have presence in the mix while still sounding natural, although it could slightly emphasise sibilance with some voices that are that way inclined.

Overall, though, this is a mic that would be quickly out of the cupboard if a vocal needed to be recorded.

The airy top end is also an asset for recording acoustic stringed instruments, all of the detail clearly coming through with plenty of definition when recording various acoustic guitars. Close-placement is also aided by the unobtrusive suspension cradle.

In the course of a whole day's session, recording an album track solely using the Saturn, quality results were achieved not only on lead and backing vocals, but such disparate sound sources as whistling, tambourine and other percussive sounds plus melodica, the latter being recorded using the open and natural sounding omni mode to include some useful ambience, all of this reinforcing Sontronics' claim that the mic is an all-rounder.

There are many contenders out there if you are looking for a large diaphragm cardioid condenser to record vocals and Saturn would certainly be high up the list if that were all it did. However, those extra patterns give it a much wider repertoire, making it a studio workhorse in a similar vein to such industry standards as the AKG 414 and Neumann U87.

With that versatility, the Saturn could be your go-to microphone for a host of different tasks.