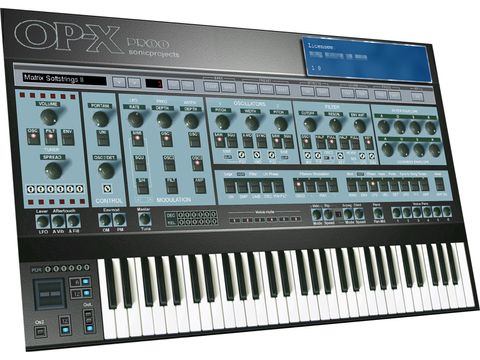 It's somewhat baffling that you can take your pick from dozens of Minimoog emulations but SonicProjects' OP-X is the only major Oberheim clone on the market.

OP-X is primarily based on the Oberheim OB-X, but what makes it more interesting is that it's not just a straight clone. The latest version offers a number of updated features that make it a match for any vintage emulation.

Released in 1979, the Oberheim OB-X built on the success of the SEM and its polyphonic stable-mates, eventually spawning the updated OB-Xa and OB-8.

SonicProjects' OP-X plug-ins are based on the OB-X, but with a number of updates which bring it crashing into the 21st century. Pro II offers far too many subtle tweaks to the OB-X formula to go into detail here, but the filter section is a perfect demonstration of SonicProjects' forward-thinking approach.

The OB-X's 12dB/oct low-pass filter offered a big, fat sound quite distinct to the likes of Moog or ARP, but Pro II makes things even more versatile with the addition of the state-variable features of the SEM's VCF, a 24dB/oct mode and a switchable self-oscillation mode.

This kind of attention to detail pays dividends when it comes to the synth's sonic capabilities. Just like the original synths that inspired it, OP-X Pro II is capable of producing a wide range of sounds, but excels at pads, warm strings and bass.

In addition to all the classic sounds that you'd expect to find hiding in the presets, OP-X also performs surprisingly good impressions of a number of other synths, from the Roland Jupiter-8 which inspired its invertible filter envelopes to the Sequential Circuits Prophet-5, which offered up a variety of filter modulation options.

Later Oberheim synths were based on Curtis chips, but the OB-X famously featured discrete components in every part of the signal path.

In theory, each of its voice cards were identical, but the manufacturing tolerances of discrete components invariably meant that minute differences existed between each voice.

The trimpots are a fascinating and genuinely useful feature, allowing you to move from perfectly even calibration to extreme variations between each of the synth's voices.

When combined with the basic but usable delay and reverb effects and the powerful arpeggiator, it's a highly versatile sound engine.

With so many options on offer, it's not surprising to find that OP-X Pro II rewards time spent editing and tweaking sounds.

The overall layout of the plug-in is relatively easy to get to grips with, but some features are notably less straightforward than others, and it took quite some time for us to get used to the OP-X filter.

The morphable multi-mode design is admittedly flexible, but there were plenty of head-scratching moments along the way as we tried to figure it out.

The 97-page PDF manual is very thorough - if occasionally written in slightly unorthodox Euro-English - but the GUI could really be a lot more user-friendly.

The decision to stick with much-maligned OB-X controls such as the 'half' and 'full' oscillator mix buttons, for example, seems unnecessarily slavish to the original 1970s design.

Holding and dragging the buttons allows continuous control of the mix settings but a simple pair of rotary controls would surely be much more convenient without diluting the concept too much?

Pro-II's 23 'active zones' allow immediate control of various functions and one-click recall of settings by clicking on hidden hot spots around the window, but it's not the most obvious way of accessing parameters.

If you want to find out just what made Oberheim's '70s and '80s synths so special, OP-X is pretty much your only software option.

Luckily, it's a very good one indeed. Pro II offers a kind of Oberheim greatest hits package, striking a great balance between staying faithful to the original character of the SEM, OB-X, OB-Xa and Matrix-12 while also throwing in a few updated features.

With a distinctive Oberheim-inspired sound and a series of unique editing capabilities, it's hard not to be impressed by the plug-in's sonic capabilities.

The one area that slightly lets it down is the editing interface. It's by no means a complete disaster, but it seems that the OP-X plug-in has simply outgrown some of the OB-X-derived GUI. Even so, the interface issue doesn't change the fact that this is a highly capable synth.

Messing with the classics is a dangerous game, but SonicProjects have succeeded in creating a modern take on the best features of Oberheim's 1970s and '80s synths.