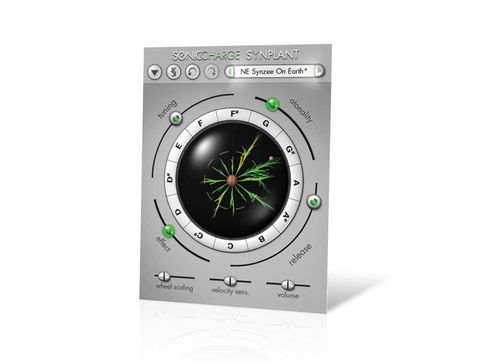 It could have ended up in the little shop of synth horrors, but Synplant has flourished into a superb, prize-winning specimen.

We love our virtual analogues, ROMplers, hybrid synths and all the power that they bring, but let's face it: synthesizers haven't changed that much over the last 20-odd years.

Oh sure, there are different algorithms and methods of sound generation, but the approach has rarely stepped off of the familiar path of oscillator, filter and amp.

You can understand, then, why our interest was piqued when we first set eyes on Synplant; with absolutely no faux wood panels or incandescent VU meters, it offers little in the way of familiarity.

Synplant's developers have devised a cross-platform plug-in that sheds the usual synthesizer paradigm in favour of a "genetic approach" to sound design. The seemingly simple GUI hides a deep instrument capable of producing a wide variety of interesting sounds.

It all starts with a 'seed' that floats in a pool of darkness. The seed is encircled by a so-called 'key ring' that is divided into a dozen segments, each representing one of the 12 notes comprising an octave.

'Branches' can be dragged from the centre of the seed to the surrounding edge of the key ring. As the branches change and grow, so too does the sound. Each note has a different sound, depending on the branch associated with it.

When you have a sound you like, you can take that particular branch as a fresh starting point. If you'd like each of the keys to play the same timbre (like a normal synth), you can 'clone' a particular branch.

There's an option to save a preset at any point, and Synplant's undo and redo functionality comes in handy if you wander down a path that proves to be sonically unfruitful and wish to return to an earlier point.

The 'bulb' described above is encircled by a quartet of sliders. Tuning does what you'd expect, but Atonality is a little more interesting. In the minimum position, sounds are generally (but not always) tonal; cranking it up results in increasingly far-out sound effects.

The Release slider tailors the time of the release envelope, while Effects enables one to dial in Synplant's built-in effect, described as a "chorusing reverb". All of these do what you'd expect with the caveat that they have a direct relationship with the state of the 'genome'.

This genome sits behind the main interface. Represented as a DNA double helix, each 'gene' corresponds to a parameter, with an associated slider to adjust the value. There are 37 genes, granting access to things like FM amount, envelope times and LFO balance, etc.

Of course, there's a synth at the core of it all, with a pair of oscillators that generate simple waveforms, along with filters, noise generators, envelope and effects.

If you think the genome editing will take the mystery away, think again. See, changes to the genome only affect the seed itself, which is, in turn, the basis for the sound produced by the branches. Modifying the genes might produce the effect you expect, but don't bank on it!

Our only grumble is that, as obviously slick as the genome editor is, the parameter names are pretty cryptic, and all the values range from 0 to 1.

Back in the main GUI, three more sliders affect the scaling of the mod wheel, velocity sensitivity and the master volume, and that's your lot. We told you Synplant's interface was restrained…

The sound, however, is anything but restrained. Synplant is at turns metallic and clangourous, evocative and atmospheric, searing and stabbing. That there are tons of presets hardly matters, since Synplant is all about making new ones, but they do a good job of demonstrating that just about any sound is possible, from snare drums and basses to rich, glimmering pads.

Synplant is new, engaging, and, most of all, inspirational. We especially enjoyed automating the Key Ring for pseudo wavesequencing.

The developers have gone out on a limb with this instrument to try and make the user think differently, and it's paid off, resulting in the most fun we've had with a synth in ages. There's also a great interactive tutorial to get you started.

Listen to three of our Synplant creations: