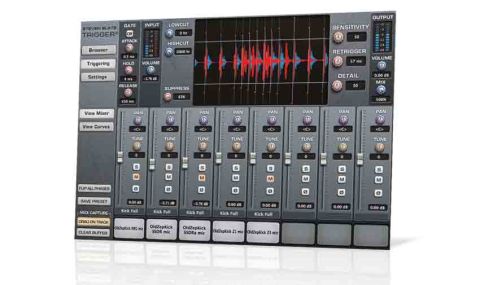 The definitive drum replacement system gets even better, with an improved engine, more slots and MIDI in/out. Stunning.

Slate Digital's original Trigger plugin already represented the state of the art, enabling a high degree of accuracy in triggering samples from recorded drum tracks - a common studio technique used to embolden the sound of acoustic drums by mixing them with sampled ones (or even to replace them altogether). Trigger 2 (VST/AU/RTAS/AAX) builds on the precision and features of its predecessor and is a free upgrade for existing users.

Trigger 2 comes in EX and Platinum editions, the only difference being that the former includes a much reduced sample library. You use the plugin by inserting it onto a channel in your DAW and feeding it a drum track containing a single close-mic'ed drum kit element - so, kick, snare or tom mics - that you want to replace. The replacement samples come either from the supplied library or your own collection, and you can now load up to eight of them for velocity layering or simultaneous triggering, rather than the six of v1.

Initial setup tweaking begins with the Detail knob, which should really be called "Threshold", as it sets the input level at which the triggering takes place. The Leakage Suppression feature is handled by feeding the target track into Trigger 2's left input and the source(s) of the problem bleed into the right input - useful in ensuring that strong snare hits coming through the kick drum mic don't get misinterpreted as kick hits, for example. The engine intelligently analyses the difference between the two to suppress the bleed on the target signal.

Leakage Suppression isn't new to version 2, but the engine has been improved to make triggering more accurate, and the Sensitivity knob can be used to make even greater distinction between grace notes and bleed. It's a resoundingly successful system - in our testing, it handled a snare track on which the hi-hat spill seemed louder than the delicate snare detail with aplomb.

The trigger signal can be further refined using the low- and high-pass filters, which are useful for rolling off general boom and rumble from loose toms and kicks, or for cutting out top-end transients from bleeding hi-hats on the snare, thus tightening the triggering accuracy. With a range up to 100ms, Retrigger is the final refinement tool, setting the minimum time that needs to pass before the next trigger event is allowed through, thus preventing unintended flamming and stray double hits.

Once you've got your triggering set up, you can focus on the dynamics. As mentioned, each of the eight sound slots can be assigned a velocity range for grading softer and harder sounds. Each slot also has an ASR envelope and a knob for scaling the dynamic range of the replacement sound relative to the level of the trigger signal. It takes time to set all of this up, but the quality of results are absolutely amazing.

There's also an impressive new noise gate feature, driven by the detected hits but applied to the dry, mic'ed signal (which can be blended in with the triggered sound with a dry/wet mix control), enabling incredibly tight and accurate gating when set up correctly. Also new for v2 is MIDI input/output.

While Trigger 2 might not be the most radical update ever (it is a free one, after all), it's on the inside that the big changes have been made. The precision with which it defines, captures and replaces drum tracks is intelligent and effective to the point of feeling magical.