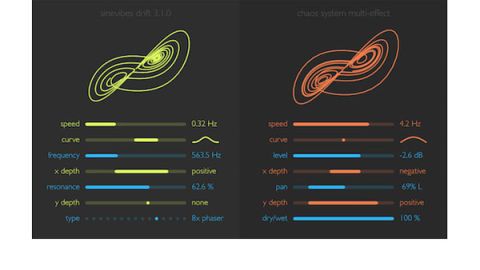 A fun and occasionally useful tool, Drift isn't one of Sinevibes' best, but there's certainly nothing 'wrong' with it.

We're big fans of Sinevibes plugins. They're sometimes excellent, always very affordable, often a little bit quirky, and usually useful and fun. The Ukrainian developer has indulged in a few overly esoteric excursions of late, though, and the 3.0 update to its filtering and phasing effect, Drift (AU), upholds this approach, being based on two Lorenz chaos systems ("three dimensional oscillators widely used by scientists and engineers to model convection in liquids and gases" - but you knew that, right?).

Visually, Drift adheres to the current Sinevibes 'look', with a simple slider-based interface and a small palette of bright, clear colours differentiating the parameters and values of two Lorenz systems (see Chaos theory).

The first Lorenz system controls a multimode filter/phaser effect, offering modulation control of Frequency (X axis) and Resonance (Y axis), and boasting 13 modes (12dB and 24dB/octave low-pass, high-pass, band-pass and band reject filters, plus 4-, 6-, 8-, 12- and 16-stage phasers). The relative amounts of X and Y modulation are set independently, while Speed and Curve sliders control the shape and rate of modulation.

The second Lorenz modulator controls panning and amplitude, with the same Speed and Curve controls as the first, plus bipolar X and Y modulation amount sliders. Finally, there's a Dry/Wet control that, while occasionally useful, doesn't really suit this particular effect for our tastes - it's an all or nothing choice, we say.

Drift isn't the only modulated filter to be based on real-world physicality: formant filters - of which there are many available - approximate the vowel sounds created by the human mouth.

Unlike formant filters, though, which are designed specifically to elicit a very specific vocal-style effect, Drift is just an interesting tool for generating simple filtering, phasing, panning and level modulation - it won't make the listener immediately think of swirling clouds or bubbling liquids.

That said, at slower modulation settings, the way sounds appear to swirl around from left and right, picking up speed and slowing down seemingly at random, is reminiscent of whistling wind moving around the listener.

Drift does a good job of adding interest to pads, strings, and evolving sound effects and edits. Its filtering, phasing and faster panning capabilities can also be used to apply a stereo effect to synths and even loops and basses.

With that in mind, one thing we think would come in very handy is a low-end monoising control, allowing the panning of low-end signals to be reined in without needing an additional plugin.

Our one issue with Drift is that, for a plugin based on two three-dimensional modulators, the results are a little... well, one-dimensional. That perhaps explains the sparsely populated preset folder, which houses just eight patches.

In other words, Drift does one thing well, but that one thing isn't exactly life-changing - which isn't to say that it's of no worth or consequence at all. Drift is neither a classic plugin nor an essential one, and, truth be told, it's not hugely versatile - but it is cheap, it won't go out of date, and it'll almost certainly come in handy from time to time.