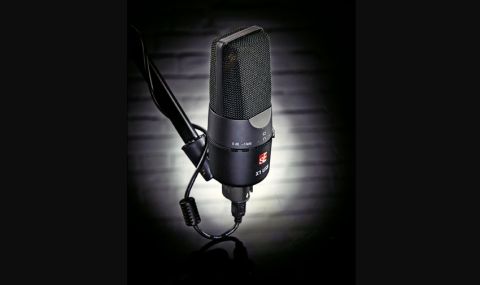 A solid and self-contained solution for the lone recordist with a nice tone.

The X1 condenser mic is a classic sE model providing real quality in an affordable package. Of course the logical step is to make it a one-stop-shop for a laptop/tablet based recording set-up.

As a mic the X1 USB is a large diaphragm cardioid pattern condenser with 10dB pad and low cut (60Hz) switches. As a USB 2.0 interface you get up to 192kHz sample rate conversion (24-bit) and a built-in headphone amp via 3.5mm TRS socket with a zero latency monitoring level control mounted on the front of the mic.

The X1 USB is a solid mic that feels like it will withstand a rough laptop bag kinda life, though it is not so weighty to qualify as a 'stand strainer'. Getting started is a cinch as it's a plug and play USB audio device. Playback levels are software controlled (OS or DAW package) with the hardware monitor level control delivering a good balance for recording to a backing track without too much fiddling.

If you want to monitor through your DAW for effects then the monitor can be dropped out entirely. A mic-based USB interface is likely to be used close to the laptop/ tablet so the supplied 1.5m cable will suffice, though we used a 2m extension and encountered no problems.

The headphone amp quality is good with plenty of level to overcome background noise on most closed-back headphones (we used a 250 ohm pair for the review). It does seem odd to be plugging into the mic itself (the socket is on the side), and care should be taken to prevent the cable knocking against the mic or stand during recording - just what velcro cable ties are made for.

The mic part of the X1 USB is the same as its non-cyborg sibling, and it does seem to possess the same clear, un-hyped sound quality. Neither airy or bass-centric, the voicing is well suited to acoustic instrument and vocal work with a pleasingly natural mid range.

In the latter case the proximity effect is well contained allowing you to get right up on it without disappearing in low-end fug, though you'll want a pop shield if you do.

As the preamp is built in there is no way to adjust the gain beyond post-conversion digital level control. Compared to using a mic and external preamp, the X1 USB has a limited SPL range so you'd be lucky to capture a guitar amp and drum kit at relatively close range even with the 10dB pad engaged. This is not its target usage, especially considering the short leash of a USB cable, and for a loud vocal with the 10dB pad and a little distance there is still headroom at the other end of the AD conversion.

At the other end of the scale the noise floor is higher than a modern condenser mic/preamp combo with some HF artefacts from the extra electronics poking through. This is only apparent with large dollops of post recording gain on very quiet sources.

The X1 USB is aimed at voiceover, video presentation and singer/solo instrumentalist applications, and the sound quality fits the bill admirably. An equivalent mic and preamp equipped sound card is not possible at an equivalent price.

Of course if you're planning to expand into a larger recording set-up or work with a broader range of sound sources then separate devices would be a more sensible long term investment. If you've already got a laptop and headphones, then the X1 USB and the mic stand of your choice may be all you need to get your voice or songs down on disk.