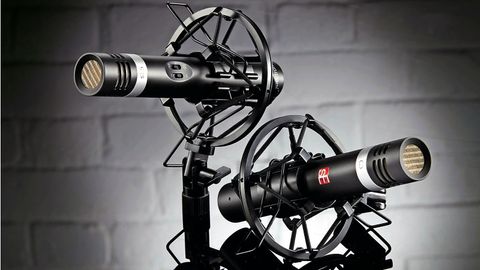 This is a fine package for when you need to record any ensemble or instrument in stereo.

Launched at this year's NAMM show in January, sE Electronics' new sE5 mic is a small diaphragm condenser that is available singly, or as a matched pair - the subject of this review. The sE5 follows a lineage from the sE4 model, which itself was derived from the sE3. Whereas the discontinued sE4 featured interchangeable capsules, the new mic has a fixed cardioid polar pattern like the sE3 did.

The mic pair are supplied in a foam-lined aluminium carrying case that holds the two mics, their shock mounts and a mounting bar so that you can fix both mics to the same stand for stereo recording.

The mics are smartly finished in matt black with a silver band and the red sE logo. Each has two easily-accessed and adjacent switches that respectively offer a bass cut below 100Hz and a choice of attenuation with -10dB and -20dB pads available.

The shock mounts are nicely designed so that you simply squeeze the two halves of a wire clip to slide the mic into a collar that holds it securely. The cradle has a 180 degree arc of movement for vertical positioning of the mic with the metal tightening bar not needing too much finger pressure at all to keep everything firmly in place.

If you are not looking for a particularly wide spacing of the mics requiring separate mic stands, or want to make sure both mics are equidistant from the sound source to negate any phase issues, the stereo mounting bar works extremely well on a single stand. The shock mounts are easily attached to it and you have a range of lateral movement that can see the mics utilised as a crossed pair, coincident pair or spaced at a maximum of 16 inches (40cm).

To get the flavour of an sE5 we started out with just a single mic put to work recording a couple of acoustic guitar parts close in and pointing to the fingerboard near the neck body join where the best balance of high and low manifested itself.

The sound achieved was clear and accurate with transients handled well and a high-end presence that suited the detail in the guitar sound. While mono works just fine for many, adding the second mic opens up the use of a range of mic placements, allowing panning options in the mix and again we got good results with the mics spaced for body and neck sounds.

Next use was in recording a Hammond organ through a Leslie rotating speaker cabinet. The dimensional quality of the sound of one of these as the horn rotates really needs a matched pair of mics to capture it and the sE5s did a fine job - nicely balanced and with airy high-end. While the sound was quite loud, the pair are able to take high SPLs and handled it with no problem.

Although we didn't get a chance to record a drum kit during the review period, we felt that the sE5 pair could do a great job as an overhead pair or individually as spot mics on cymbals. Likewise there was no opportunity to record an acoustic piano but we felt the mics were eminently suitable and that this could be the sort of task where the stereo bar would come in quite useful.

A matched pair of condenser mics is a must for any professional recording studio but it's also a sound investment for the project studio owner and hobbyist who wants to expand their range of recording options - it could arguably be the most useful second mic purchase for anyone who has started out, as many do, with just a large diaphragm condenser for vocals and whatever else they can put it to use for.

For anything that needs to be recorded in stereo the sE5 pair is a solid choice for decent sound quality at a reasonable price.