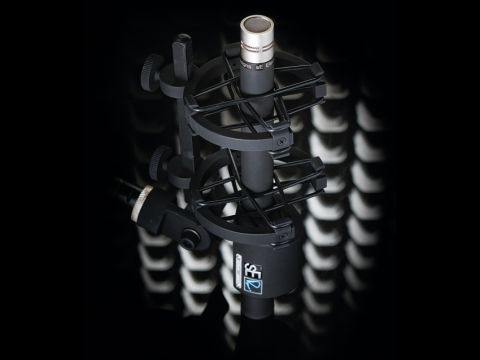 A distinctly natural and detailed mic that will produce great results whatever the session.

Just as their first model, the RNR1 sought to address the inherent problems of the ribbon microphone, the RN17 has been designed to extend the acoustic and electrical standards of the workhorse small diaphragm 'pencil' mic.

The result is a multi-capsule microphone system aimed at the high quality field currently served by names such as Schoeps, DPA (ex-B&K) and Neumann - a field where the Neve name carries much weight.

The RN17 looks like a snake that swallowed a dustbin, although the dustbin in this case is the step-up transformer that is an essential part of all Rupert Neve designs and is critical to maximising the quality of the preceding head-amplifier.

The mic comes with five canisters in the wooden storage case that house the range of capsules made for the RN17, though the mic is supplied with just the cardioid capsule: omni, figure-of-8, hyper-cardioid and bass-roll-off cardioid capsules are available separately.

The trick with condenser/electret transducers is to balance the upper frequency range cutoff, dictated by diaphragm density/diameter (smaller=higher), with the noise performance that deteriorates as the diameter is reduced.

To this end, and thanks to the Neve head-amp, the RN17 utilises a slightly smaller than usual capsule compared to many SD mics, though not tiny like Earthworks and some DPA mics.

The first impression of the RN17 sound is one of clarity and detail. Across a range of sources the RN17 captures and articulates a highly natural sound that neither hypes nor hides any particular frequency area.

In comparative tests, the RN17 frequently offered a more balanced or flat tone, although sometimes this translated as less 'forward'. On RN17 maintains a precision that other mics begin to lose as phase shifts and transient losses become more pronounced across the frequencies.

The well-balanced behaviour of the RN17 extends to its performance with regard to proximity effect and off-axis response (with the cardioid capsule).

The clear delineation of the source allows off-axis sounds (room reflections in particular) to remain phase coherent while getting up close emphasises the LF range without collapsing into a low-mid mush.

This mic is particularly suited to the naturalistic capture of sources with a transparency that works well on grouped instruments where the balance is already set.

Maybe it's due to the mics we're used to, but there is a low-mid presence that we expect that's a little light here and has us reaching for the EQ on occasion, but the lack of any obvious phase shift problems means that the RN17 output can be poked and prodded quite far without falling apart.

The RN17 is clearly aimed at the higher end of the market, just as with the RNR1, and its price places it against some strong competition.

The fidelity of this mic is excellent and the flexibility of a multi-capsule system makes it a worthy investment, though this will depend on the price of the other capsules.

The non-standard design of the mic, again like the RNR1, may put some (less imaginative) people off, but it is no gimmick, rather a shape dictated by a lack of compromise on the audio quality.

This is a great-sounding mic that can fulfil a wide range of roles in the studio and on location without ending up as the 'niche' choice.