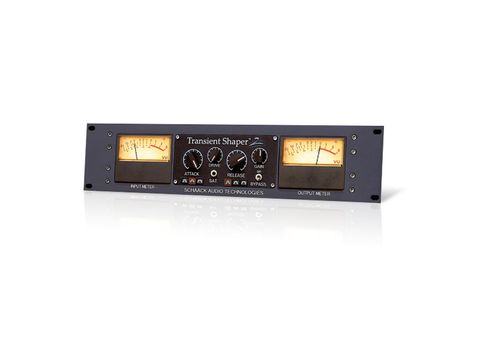 Transient Shaper 2 is destined to become a studio staple for many, thanks to its ease of use, quick and impressive results, and great price.

There are numerous ways in which you can mould the envelope of a sound - at the top of most people's list would be to use a compressor. However, you'd be right in thinking that a gate can also be of assistance, particularly when it comes to the release aspect.

Transient Shaper 2 combines elements of both processes in a one-stop plug-in, but like SPL's famous Transient Designer hardware unit, the resultant effect goes way beyond the limitations of traditional dynamics processing.

From sharpening up snares and kicks to lengthening or shortening reverb times, Transient Shaper 2 is capable of both salvaging unusable sounds and creating new ones. What's more, because its behaviour isn't level dependent, you don't have to waste time messing around with threshold levels to get great results.

Transient Shaper 2's interface is simplicity itself, and is dominated by attractive VU-style input and output meters. Sound shaping is done using the Attack and Release controls, but in addition, there are knobs with which to set Drive (an LED indicates activation) and output gain, both of which are post-envelope shaping.

The Drive control is one of the features that's new to version 2 - the adjustable attack and release shapes - named Sharp, Mid and Soft - are also new. Also, if you find the VU meters a bit much, you can now minimise the interface by clicking the top-left corner.

Although TS2 owes much to SPL's original concept, in practice there are a few differences. Firstly, the transients are internally limited so that they don't get completely out of control, and secondly, the release phase is program-dependent, which results in smoother behaviour with fast settings.

The Gain knob helps to keep things in check, as increasing the Attack, Release or Drive will naturally raise the perceived volume level. The range of control is impressive, but it's interesting how modifying sound in this way can also have a dramatic effect on the frequency content.

With a slow release, the sound is akin to that of heavy compression, while with short release times, you head into gating territory.

The new attack shapes in v2 produce unexpected results - on snares, the fast option is so sharp that the effect is less audible. Conversely, the slower attack produces a fatter, more noticeable effect.

The release shapes are a little more predictable, with the fast option producing a pumping, compressor-like effect with room mics on a drum kit. The Transient Shaper can also be used to add punch to flat-sounding basslines.

It's difficult to fault this nifty little plug-in, and at €59, it's well-priced. If you do a lot of work with live drums - or just like mashing things up - it's a must-have.

Listen to Transient Shaper 2 being used on a variety of material: