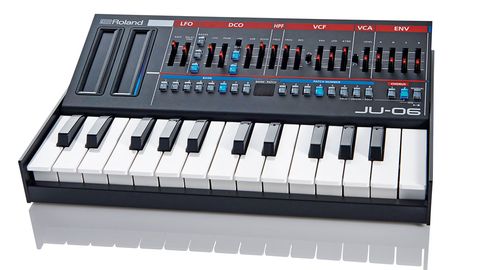 The key characteristics of the Juno-106 but without the reliability headaches. An essential purchase.

Launched in 1984, the Juno-106 was the successor to the Juno-60, adding basic MIDI, a new all-metal/plastic case and 128 memories (vs76); plus the Juno-60's arpeggiator was removed (unfortunately)!

Old Junos are still very popular today, as they offer a rich and distinctive sound with a wide sweet spot, at a reasonable price (around £800).

However, with reports of 106 voice chips failing and a full set of replacements costing 280 euros (from www.analoguerenaissance.com) you might be wary of buying an old 106.

So, for those that are scared off, the Roland folks have answered your prayers with the Boutique series JU-06 - a 4-voice ACB emulation of the original Juno-106.

The JU-06 is built into the same metal faced/plastic chassis enclosure as the JP-08 and JX-03 and has the same solid build quality, power via 4 x AA batteries (or via the MicroB USB socket/ your computer) and a 0.5 Watt speaker for playing on the move.

The sliders are nicely playable, having considerably more travel than the JP-08. Like the other Boutiques, the JU-06 uses colour schemes and layouts that closely reflect the originals; so, for example, there are blue backlit buttons and the same red name tabs for each sound engine section: LFO, DCO, HPF, VCA and ENV.

To go into a little more detail, there's an LFO with rate control plus delay and the LFO can be sent to the DCO and VCF in varying amounts, (dictated by the position of the LFO slider in each section).

The LFO goes into audio range too for clangorous/distorted sounds, effects and dirt and it also goes faster than we remember on our original 106.

The DCO section features a single DCO (Digitally Controlled Analogue Oscillator) but, as DCOs are inherently more stable than VCOs, the famous chorus effect is included to add width/ animation.

Other features include poly/ solo/unison modes, 16', 8' and 4' range switches, a PWM level slider (dictates how much PWM is applied to the pulse wave) and a switch to dictate whether the PWM rate is set manually (MAN) or via the LFO.

There's also an upwards ramp (saw) wave which can be switched in alongside the pulse for pulse/saw mixtures and a ballsy-sounding square wave sub-oscillator for thickening up sounds, just like the original. Finally, in the DCO section, there's a noise slider for blending in white noise.

Next up is a fully variable 1-pole HPF (like the Juno-6) - this differs from the 4-position switch on the 106 and gives a wider range of tones which is great. Also onboard is a 24dB low-pass filter which has frequency and resonance controls (it's a great-sounding, versatile filter with plenty of texture, spikiness and balls on the low-end), then an envelope polarity-flip switch and sliders for the amount of envelope to filter, amount of LFO to filter and amount of keyboard voltage tracking the filter (with this set to full, the filter will open up as you play higher).

Next is a VCA level control and a switch that dictates whether the envelope is a simple on/off gate or whether the sound is shaped by the envelope's ADSR (the final section on the far right).

It's all very simple on the surface but a surprisingly wide range of tones are coaxable from just these basic controls.

We should also mention the sound selection buttons and there are eight banks with eight patches in each, (half as many sounds as found on the Juno 106). This is slightly disappointing as, with a unit that sounds this good, you want as many patch storage locations as possible! Once again (like the other Boutiques), these buttons also double as function buttons and as step on/off buttons for the sequencer.

The sequencer is the same 16-step/16-pattern monophonic affair as on the other Boutiques (featuring swing and seven play-order modes) and it can be clocked via MIDI, though unfortunately it doesn't output MIDI.

It's nonetheless a very handy scratchpad/ideas generator and great to have onboard. Also (like the other Boutiques), MIDI CCs are only available for the mod ribbon, expression pedal and hold (CC 1,11,64), though slider automation is possible via Sysex.

The sliders also transmit Sysex in Chain Mode - this mode allows chaining of further JU-06s (or other Boutiques) via DIN MIDI for additional polyphony.

We've always loved the Juno-106's simplicity/ versatility and how quickly you could dial in a sound/hit a sweet spot and the same is true here - the JU-06 really nails the inherent tone of the Juno-106. In fact,

We find this to be an even more successful emulation of the Juno-106 tone than the JP-08 is to the Jupiter-8. However, the sound is slightly more compact when compared to the original 106 (particularly noticeable in unison and poly modes) due to two fewer voices.

Also, (like the JP-08) the top-end/high-mids appear to sound less open/lively compared to the original 106. This isn't a problem (it's merely an observation/difference between ACB and real analogue) but it's worth being aware of all the same.

In most other respects, it's surprising just how close the JU-06 is to the 106 and all those classic sounds are easily made - once again the JU-06 demonstrates what a powerful technology ACB is. If you want an authentic Juno-106 emulation in a compact, reliable and reasonably-priced box, then look no further!