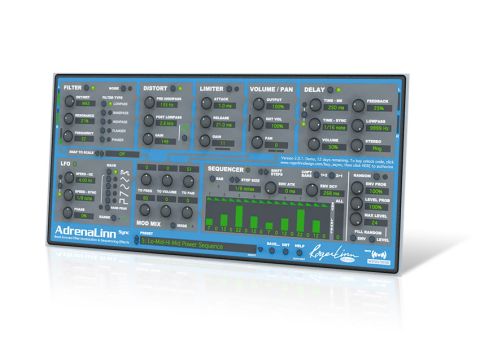 Not just for guitarists, this plug-in inspires with its combination of splendid sound quality and groovy modulations.

It was around 1980 when Roger Linn became a 'name' in music technology with his LM-1 sample-based drum machine, the sounds of which featured on countless hits.

Fast forward to 2002 and Roger founded his current venture, Roger Linn Design, this time focusing on guitar floor effects units with the AdrenaLinn series, which combine sequenced digital multieffects with a drum machine and amp modeller. Plug-in AdrenaLinn Sync v2 is based on the company's most recent pedal, AdrenaLinn III. It's currently Mac-only, but a Windows VST is imminent.

The internal drum machine, amp modelling, stereo reverb and guitar tuner of the hardware version are all absent. Presumably the idea is that these are all better catered for by other plug-ins, and we'd have to concur.

The plug-in one-ups the pedal in a number of ways, however, featuring dual modulation paths and stereo tempo-synced delay up to 32 seconds long. The top half of the GUI comprises the Filter, Distort, Limiter, Volume/Pan and Delay sections, which run in series, in that order (with an option to place the distortion before the filter module).

Worthy of special mention are the very smooth analogue-modelled filters courtesy of Way Out Ware, who handled the coding and DSP aspects of the plug-in. The filters come in low-, band- and high-pass varieties, as well as flanger and phaser modes.

The frequency parameter is set in semitones, so you can tune the filters to musical values. With the Snap To Scale option activated, the notes will always be in the selected scale, too. Noise can also be added to the filter input, which can create some neat percussive sounds.

We found AdrenaLinn Sync's presets to be so good that you need never delve into creating your own patches. They're well labelled, too, with some of the note-like resonant filter patches including the musical key in the name.

What's more, there are some cool replications of the AdrenaLinn settings used by famous artists, including John Mayer and Green Day.

100 new presets have been added since v1, all of which have been designed to take advantage of the new analogue-style filters found in v2. There are also 28 slots for saving your own patches.

Our only minor gripe is that every time you choose a preset, adjust a parameter and then decide to try another patch, a nag screen comes up reminding you that you haven't saved the current settings. This holds you up when you want to quickly try things out and see what the parameters are doing to the sound.

The tempo-synced LFO and 32-step Sequencer can modulate the filter frequency, volume and panning. The highlight has to be the Sequencer, which has beat divisions in 1/8 or 1/16 in straight, triplet, half-swung and swung variations. On a per-step basis, you can set not just the level but also the mode of a two-stage (attack/decay) envelope generator, which can be used to cause transitions between certain steps (or turned off for normal stepped operation).

AdrenaLinn Sync can generate everything from burbling tremolo, through auto-wah or envelope filtering, to complex resonant filter sequences. Used for real-time guitar processing, the excellent modulation capabilities make you rethink how to play your instrument.

Less is more with this plug-in, as it provides most of the rhythmic variation and can generate note changes through resonant filter sequencing. The simplest ideas can give rise to interesting phrases or chord sequences.

We strongly recommend that axe-wielding computer musicians consider AdrenaLinn Sync v2, as it has a highly adaptable and inspirational sound. And if synths or sampled instruments are closer to your heart, it can just as easily transform a tepid tinkle on the ivories into a rhythmical slice of genius.

Check out our audio demos to hear what the AdrenaLinn Sync v2 can do:

Up & Down Filter Sequence Guitar