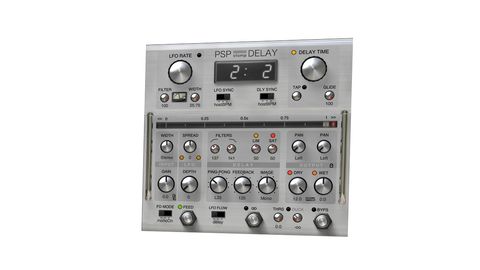 A near faultless, ridiculously versatile delay with a fabulous sound at a steal of a price. We're blown away!

At its heart, stompDelay is a tape-style delay housed in a performance-orientated delay pedal interface that enables and encourages real-time adjustment of the delay time (or tape playback speed). This is done either manually or via the onboard LFO - hence the prominence and size of the LFO Rate knob in the top panel, alongside the Delay Time knob itself.

Both can be set in Hertz or locked to a range of note values, either at a user-defined tempo or synced to the host DAW, and the LFO offers ten shapes, a low-pass filter (for smoothing the action in certain circumstances) and a Width setting, which works rather like a synth oscillator's pulse width control.

The delay time can also be set using the range-adjustable horizontal slider in the middle of the GUI, or a very accurate tap tempo function. The other main delay control is Glide.

Next come a set of mix controls, including Input level, stereo Width and LFO Spread (offsetting the LFO phase between the left and right channels), plus high- and low-pass filters, a one-knob limiter and saturation modules. The Ping-Pong knob progressively shortens the delay time for the left or right channel, depending on which way you turn it.

Delay Feedback and Image (stereo width, from swapped stereo to regular stereo via mono) knobs follow, then there's separate gain and pan controls for the Dry and Wet signals.

The bottom strip is where the 'stomp' part of the name comes in, with its three footswitch-style buttons. The left-most one punches the feedback circuit in and out, the right-hand one bypasses the whole plugin, and the middle button switches stompDelay to its 'Infinity' looper mode.

Activating Infinity Mode initiates a continuous loop of the current contents of a dedicated buffer that sums the pre-delay buffer and feedback circuit - so for it to do anything, you need to have captured some audio in the buffer in regular delay mode first.

Delay Time governs the loop length, and all the other controls (except for Ping-Pong and Spread, which are deactivated) work just as they do in delay mode. Infinity Mode is awesomely creative in the studio and - as with all of stompDelay's controls - the button can be assigned to MIDI controllers, making it a very viable performance tool, too.

Finally, the Ducker dial adjusts the amount by which the dry signal attenuates the wet signal when both are present.

PSP stompDelay is capable of generating the full gamut of delay-based effects: flanging,doubling, chorus and every kind of echo imaginable, from epic Strawberry Letter 23-style swells to dub delays, slapback and classic ping- pong. It's also an incredibly easy plugin to edit and tweak.

Perhaps the best thing about it, though, is that from the irresistible Tap tempo button to the Infinity Mode switch, it really does encourage you to get hands- (or feet-) on, and has a knack of always guiding you to something useful. No matter what angle you come at it from, this is an essential plugin.