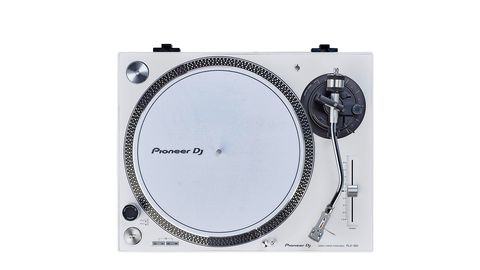 Is the Pioneer PLX-500 the best budget deck on the market? Yes. It looks like a Technics 1210, and doesn't perform too far off.

The launch of Pioneer's high-end PLX-1000 DJ turntable last year caused a few 'oohs' and 'ahhhs', and fitted nicely into that gap left by the demise of the mighty Technics 1210.

Seemingly enjoying its saviour status, Pioneer has now decided it's up to it to rescue the budget end of the DJ turntable market too. Enter the PLX-500 - Pioneer's sub 300 quid deck.

The platter pickup isn't as fierce for a start, but it'll do zip to thirty three and a third in one second. Compared to 0.3 seconds for the PLX-1000, it may feel a tad sluggish for top-end turntablists, but the other 99% of the market will be more than happy with that performance.

Speaking of you scratchy types, the PLX-500 doesn't buckle under duress from intense platter wobbling scratch manoeuvres like drills, tears and hydroplaning (look 'em up). It ships with a slipmat, needle, and headshell, which are actually up to the job, but add a Shure M44-7 stylus and headshell to the mix and this deck approaches 1210 invincibility.

How is it for mixing? Well, let's compare it to the 1210 again. When rocking the PLX-500 in a set-up with a Technics as the other deck you'd think it would pale next to its legendary counterpart. Not so. We found that Pioneer's deck more than holds its own.

The 500's platter isn't as rock solid as a 1210, rightly - a lighter rub of your 'slowing the deck down' finger is needed as you'll encounter less resistance than you're used to - but once you've got accustomed to it, it's plain sailing.

As for other features on this deck you get + and -8 on the 'tempo' control, 33, 45 and 78RPM choices and, like other turntables out there hovering around this price point - Audio-Technica's LP-120, for instance - a USB-out port, allowing you to digitise your vinyl for listening on other devices, or dropping into apps like Pioneer's own rekordbox DJ software.

A quick look round the back, however, and you're greeted by the kind of budget RCA cables you'd pick up for a quid at Maplin - and they're hard-wired into the deck. Pffst!

Also, the tone-arm shoulder looks a little cheap, but you've gotta keep costs down somewhere, right? And, fair play, it doesn't mess with performance - if you calibrate the weight, height and anti-skipping dial to match your stylus and needle set-up, then you're golden.

Predictable quibbles aside, the PLX-500 is a great deck - arguably the best out there at under 300 smackers. It's pretty much perfect for would-be turntablists not wanting to break the bank, or any new wave DJs finding controllerism a bit naff, fake, or fiddly.

Bottom line: turntables are the foundation of disc jockeying, and Pioneer's PLX-500 decks are more than capable of helping uphold that precious legacy for the next generation.