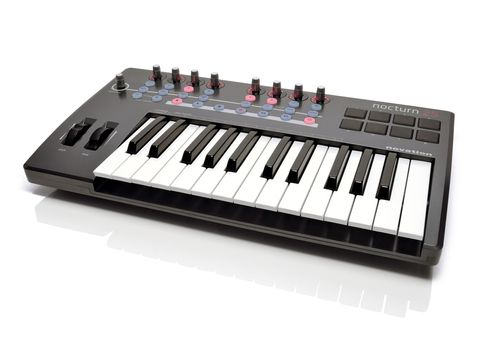 Compact, well-priced and ready to take control - Nocturn Keyboard is a winner.

In 2008, the launch of Novation's Nocturn brought extensive control at a super-low price point. Now Nocturn has returned, but in keyboard form.

Two Nocturn Keyboard models are available with 25 and 49 keys respectively. Key number aside, the units are identical, with the same range of control/transport switches on the top panel and the same rear-panel connections too: USB connector; Sustain and Expression pedal ports; and an On/Off rocker switch.

The keyboard is Fatar designed, with assignable aftertouch. We tested the 25-key model and were impressed by the playing action. The keyboard here feels robust and responds well to touch, needing a decent level of thwack to achieve higher velocities.

Anyone familiar with Novation's controller range will know that the interface between the hardware and your DAW of choice is Automap, the company's intelligent 'learning' software. This lets you assign knobs and pads quickly to the controllers of your choice.

"The keyboard is Fatar designed, with assignable aftertouch. We tested the 25-key model and were impressed by the playing action."

To coincide with Nocturn Keyboard's release, Automap version 3.3 has been released, which addresses a substantial number of known issues. However, the big news is that Apple has now accepted Automap's SDK as part of Logic 9 - so long as you have v9.01 and the latest version of Automap, you'll find that you can finally use Automap to control Logic's native plug-ins.

At the time of writing, the range of supported plug-ins is limited, but you can expect this to change and, of course, there's nothing to stop you building maps of your own

A slightly odd physical omission is the crossfader that made the original Nocturn suitable for performers and DJs. You would have thought that it would be a perfect time for Novation to market a new version of the mini controller with a crossfader and maybe even some sliders to sit alongside the grid-based Launchpad and provide a real performance solution for a tiny price and footprint.

However, Novation has clearly flipped the focus of the Nocturn away from the stage to the studio and, if that is your homestead, the eight trigger pads and 33 assignable controllers give a generous amount of control for such a modestly sized box.

Nocturn Keyboard is a winner and, particularly if you're a Logic user, things will become more attractive as additional preset maps are created. For users of other DAWs, integration is also very tight, as the HUI protocol that's used is so well established.

If you were tempted by the original Nocturn and you're not put off by the loss of the crossfader, the urge will now be that much harder to ignore.