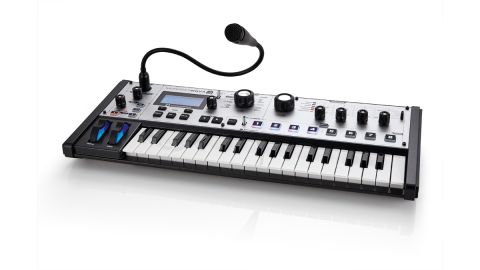 The MiniNova is still a powerful little synth and the 500 edition run makes it a solid investment too.

The original MiniNova impressed us, packing in a lot for less than £300.

Three years on, and with Giorgio Moroder experiencing a big renaissance due to his work with Daft Punk on Random Access Memories and on his own new album Deja Vu, Novation has jumped on this success and collaborated with the man himself for a signature product, the MoroderNova.

It would be foolish to think this isn't a marketing ploy but it's a solid one nonetheless. Giorgio is very highly regarded and this obviously gives the MoroderNova an extra pinch of kudos.

Secondly, there's a whole new bag of Giorgio-approved presets onboard and these nicely refresh what is now a fairly old synth in modern terms (though whether they will be available to standard MiniNova purchasers isn't yet clear).

Thirdly, this silver Moroderfied version looks a lot better than the original blue version. And finally, there's only 500 of these being made so you're getting something unique and there's a certificate of authenticity included too.

The MoroderNova is exactly the same under the hood as its standard blue brother - but that's not to belittle this still-powerful synth in any way. The MiniNova/MoroderNova is a great sounding synth that packs in a surprising amount for the money.

It's well built, takes up little space, it's pretty easy to use (and there's a computer editor/librarian included), plus it's portable and there's plenty to tweak sounds with on the front panel (including the lovely blue backlit wheels, the 'tweak' dials/matrix and the eight pads that can also be assigned to instantly tweakable parameters, much like the 'impulse morph' buttons on the Nord Lead 4).

This versatile feature-set ensures that the MoroderNova is still relevant and can cover all types of synth sounds admirably - it's easy to get lost in the depths of the engine. However, just like the MiniNova, don't expect it to cover more natural/realistic staple sounds like electric pianos/pianos, realistic strings or guitars particularly well.

The MicroKorg range is still a better bet for these bread and butter sounds. The MoroderNova is designed more for the electronic musician who likes their sounds to be largely synthetic. It plays to this niche very well and the new presets are a big improvement over the standard MiniNova patches.

Talking of the new presets, the marketing blurb says that the presets are "Giorgio Moroder approved" but out of the 256 patches onboard it's not clear which are the approved presets!

Further to this, the marketing blurb also states there are 30+ sounds approved by Giorgio but it's not clear which ones! It would have been much better to have the presets named after their respective tracks (so 'I Feel Love Bass' or 'Chase Bass') and then to have the GM initial in the corner of the display to denote the approved sounds.

However, the biggest omission is not having a Moroder category on the category dial! As it stands, we think Novation has missed a big trick here, but it could be rectified with a little patch renaming.

Regardless, the MoroderNova is a solid purchase and the limited edition status makes it a good investment. It's only marginally more expensive than the standard edition with the only downside being the stiff mini-keybed (also on the original MicroKorg).