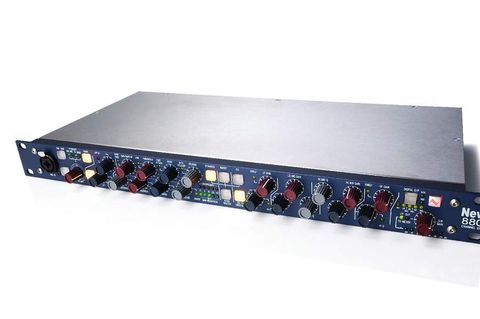 The 8801 as a whole doesn't disappoint. The quality of the input stages is second to none and vocals sound great from any number of the tested mic sources.

The world of pro audio is awash with channel strips, and AMS Neve has now joined the fray with a 1U distillation of a channel from their famed 88R desk.

Essentially, the 8801 is a mono mic/line preamplifier with dynamics, 4-band EQ, insert and key send/returns and controller recall via USB.

The unit is of the classic Neve dark blue/grey variety with white writing. The back panel features balanced mic and line inputs, and individual insert sends and returns alongside a DI input and headphone output. There's also space for the optional digital output board.

Starting on the left of the front panel you'll find a combined XLR/jack for the mic and DI inputs. Next, two buttons for the -20dB pad and +48v phantom power, and the rotary input gain control that also doubles as an input source selector. Pressing the knob switches between line, mic, DI and digital inputs.

The line input on the rear panel (a combo jack/XLR) and the front panel high impedance DI input both have -24dB to +24dB of gain via the I/P gain control, while the mic input (also duplicated on the rear panel) runs from +20dB to a healthy +70dB.

When using the DI input the pad switch changes the input impedance from over 750kOhm (for most electric guitars) to a lower 100kOhm. Lastly, in the input section lies the simple phase reverse button.

Next is the low- and highpass filter section. Both are 12dB/ octave varieties and range from 30Hz to 300Hz, and 1.5kHz to 18kHz. They're switched in and out of circuit by a simple press of each knob. The Filters To Sidechain button moves the filters from the audio path to the sidechain of the dynamics section, but more on that later.

Things get a little more exciting with the arrival of the dynamics. Starting with the compressor/limiter, here you'll find the Threshold (-30dBU to +20dBU), Ratio (1:1 to hard limiting) and Release (30ms to 3s) knobs. Pressing the Ratio and Release controls switches to Fast Attack and Auto Release modes respectively.

Multiple units can be linked (for stereo compression duties) by pressing the Threshold knob and using the DSub connector on the rear of the unit to bridge the control signals. Finally there's a Gain Make-Up control (which also enables a hard knee compression curve when pressed), and simple gain reduction metering.

The Expander/Gate section features the usual array of Threshold, Range and Release controls that also double as switches for the external Key input, Fast Attack and Invert modes. The latter turns the Gate into a Ducker for use with the Key input.

The Hysteresis knob sets the difference in threshold, keeping the width in level between the gate opening and closing signals. One push of this and the Gate functions as a 2:1 Expander. There's a Dynamics Bypass switch and another visual Gain Reduction meter.

The EQ section is a 4-band affair with two fully parametric mid bands, both offering +/- 20dB of gain and covering 120Hz to 2kHz, and 800Hz to 9kHz. The low and high bands are switchable between Shelving and Peaking modes (with an additional High Q button).

The EQ To Sidechain button moves the EQ from the audio path to the dynamics sidechain and there's also a full EQ bypass. The audio ends up at the Output section with a level meter that can display both input and output levels, and an Output Gain control.

One useful feature of this unit is the ability to reconfigure the audio routing (by default the Dynamics section is followed by the EQ and Insert loop). The optional digital output card is very well specified. It caters for S/PDIF, AES/EBU (up to 192kHz), and even Direct Stream Digital.

The main criticism of the Neve 8801 Channel Strip is of the controls themselves. The knobs feel a little too light to the touch considering the rest of the unit's high build quality, and the external PSU is a bit of a disappointment (although it does allow for cooler racking and removes a potential noise source).

But the 8801 as a whole doesn't disappoint. The quality of the input stages is second to none and vocals sound great from any number of the tested mic sources. While the dynamics don't offer the sonic quirkiness of some other units, they offer flexibility and ease of operation. The EQ is easy to use, and delivers great results.

A favourite trick, when presented with high-end outboard kit, is configuring it as an external Insert effect from within Cubase.

Of course the signal does undergo digital to analogue and then analogue to digital (D-A-D) conversion, but in the case of the Neve it's well worth the effort. The 8801 is a joy to use, bringing a sparkle to whatever you throw at it.