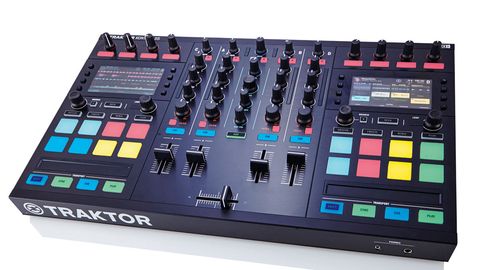 Another solid Stems controller from NI, but we miss the flexibility of the S8 and D2.

Following in the footsteps of the flagship S8 and single deck D2, the Kontrol S5 is the latest addition to Native Instruments' range of 'Stems-ready' Traktor controllers.

Developed specifically with DJs in mind, Stems is an open file format that allows tracks to be played both in their complete state by a standard MP3 player, or as four independent constituent parts (eg drums, bass, synths and vocals) when loaded into Traktor Pro.

As with its predecessors, the S5 is designed to fully take advantage of both Stems and Traktor's clip-focused Remix Decks by forgoing jog wheels in favour of a pair of 'decks' featuring backlit pads, touchstrips and hi-res screens.

NI describe the S5 as a portable Stems controller, and sure enough, despite being built around a similar four channel mixer section, it's considerably more compact than the bulky S8.

It's still at the upper end of what we'd describe as 'portable' but it's certainly got a more gig-friendly footprint, with a size and weight closer to NI's S4 controller.

Broadly speaking, much of what impressed us about the S8 remains on the S5, including the solid build quality, brilliantly implemented screens and the fluid 'touch-and-see' workflow. A number of features have been removed, however, to maintain the compact form factor.

Most notably, the S5 is missing each deck's four columns of mini faders and rotaries, which were used on the S8 primarily for mixing and filtering individual Stem parts.

While the same functionality can still be achieved in other, slightly less direct ways, it does mean that the level of control you get over Traktor feels less all-encompassing than using the S8 or D2.

To us, however, the more significant omission on the S5 is the decreased number of audio inputs. The S8 includes five input channels that can be used to hook up any combination of CDJs, turntables, timecoded control, mics or instruments, drastically enhancing its flexibility as the centrepiece of a DJ set-up.

By contrast, the S5 features just a single stereo mic/ RCA in. Whether this is an issue will ultimately come down to personal preference. For me, the problem is that this effectively means committing to a certain type of mixing, focusing largely on Traktor's (admittedly excellent) Stems, Remix Deck and beat-sync'd performance capabilities.

Unlike with the S8, however, you don't have the option to experiment with vinyl, CDJs, grooveboxes or traditional beat- matching, should you wish.

At the time of writing, since the S8's price has come down and the S5 is freshly released, there's barely £100 between their UK street prices. Right now, unless space is your main concern, We'd say shelling out that extra money is definitely worth it. Alternatively, if you're set on deep control of Stems and the Remix Decks, but portability is a major factor, consider adding a D2 to an existing DJ set-up.

Saying all that though, the S5 is a very well made bit of DJ kit, and what it does, it does very well. As long as you're comfortable with its limitations, then the Kontrol S5 is worth investigating.