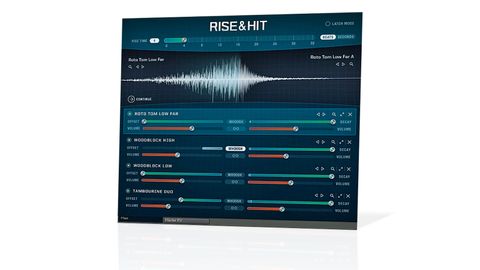 An amazing resource for sound designers and musicians alike.

A Kontakt/Player library for constructing build-ups and impacts, Rise & Hit enables you to combine up to four layers, each playing back a Rise sample followed by a Hit sample.

The length of the Rise is set in host-synced beats (1-32) or seconds (1-20), and multiple samples of varying lengths are used to keep things as artifact-free as possible through the timestretching process.

Moving a layer's Rise Offset slider to the right delays the start of that layer after note input (in beats or milliseconds) and shortens the sound so that it still peaks at the point determined by the global Rise Time, making it easy to stagger layer entry points.

The Decay sliders, meanwhile, simply shorten/lengthen the Hit sounds, and activating the Whoosh button for a layer mutes the Rise and instead loads a short 'attack' sample leading into the Hit.

Each Rise and Hit can be individually processed with one of 26 onboard filters and a further module from a list of 29 distortions, phasers, flangers, stereo wideners and more, while the Master FX page hosts EQ, saturation, compression and limiting, as well as Convolution and Delay send effects.

Every layer effect comes with one adjustable parameter, each of which can be modulated via its own high- resolution step sequencer. The Pan and Tune for each layer can also be modulated, for elaborate pitchbending and stereo 'swirling'.

On the subject of pitch, Rises and Hits can be triggered independently from the keyboard for auditioning purposes, but only at their fixed pitches, as set using each one's Tune control.

250 multilayer NKI instruments are included, and you can edit them or make your own from scratch by diving into the well-categorised 8GB library of over 700 layer presets and their component samples (666 Rises, 1122 Hits).

It's an absolutely stunning soundbank, taking in everything from orchestral swells to sci-fi rumbles, explosions and more - Galaxy Instruments' Uli Baronowsky deserves massive credit for putting it all together.