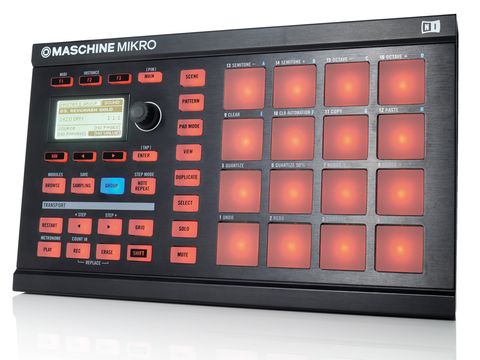 This shrunken Maschine is everything you'd expect it to be, and crucially, it retains the fun factor of the big 'un.

Even Native Instruments must be surprised at the extraordinary success that their Akai MPC-inspired Maschine hardware/software combo has enjoyed since its release in 2009.

Regular point updates since then have proved that NI are committed to making their groovebox as much of a DAW as it can possibly be. In the last few months, they've added full plug-in support and Kore-style external patch aggregation, making Maschine a more diverse (and Komplete-integrated) proposition.

With the comparatively pint-sized Maschine Mikro, NI aim to open the world of Maschine up to all those envious onlookers without the cash and/or space required for the heftier original.

The software and included sounds are exactly the same as you get with the 'full' Maschine, but the hardware has been greatly scaled down, with very little loss of functionality.

Before we get into Mikro itself, though, let's quickly run through the software…

Essentially, Maschine is a (standalone and VST/AU/RTAS plug-in) groove workstation that can be operated entirely from the Maschine hardware (well, 99% entirely in the case of Maschine Mikro) or via the software's GUI, for those who prefer to miss the point.

You can use your own samples, too; and needless to say, the hardware also works as a regular CC-outputting MIDI controller with any other music software.

A Maschine project contains up to eight Groups of 16 Sounds each (a Sound being a single component of a drum kit, for example, or any other sample or plug-in instrument) plus up to three effects (built-in or VST/AU).

The 16 pads can be assigned to trigger a Sound each (for drums and percussion), or to all trigger a single Sound chromatically (for melodic parts). Building musical parts in Maschine is a matter of loading up some Sounds/Kits, hitting Record and playing the hardware's pads.

Once you've got a few parts laid down, you can sequence them into a set of Scenes and, ultimately, a song in the Arranger area (which is a block-based sequencer).

Complete tracks can be built up without the music stopping or your hands leaving the Maschine hardware. Record parts layer by layer, delete unwanted notes, apply quantise and groove, add effects, sample external sounds, resample internal sounds, and so on - that '100% hands-on' workflow really is as smooth and seamless as NI claim, and the fun factor immense.

All the small things

The Maschine Mikro, then. Weighing 1.2kg (compared to Maschine's 1.8kg) and measuring 320x195x55mm (Maschine is 320x295x60mm), it boasts the full array of 16 percussion pads, but only one small display rather than two big ones, and considerably fewer knobs and buttons - one and 28 respectively, as opposed to the original's 11 and 41.

It also loses the rear MIDI I/O ports. So how does Mikro compare with its big brother and, indeed, fare on its own terms?

Transport, note input and 'top level' functionality are the same, but beyond that, things are pretty different - the lack of knobs, buttons and display real estate is expectably transformative.

With Mikro, however, you have to switch that single knob through each category via buttons and additional knob twists. However, the lack of dual screens and their accompanying contextual buttons has been cleverly compensated for through the addition of the Nav button, which assigns the pads to a range of Module/parameter selection and navigation functions.

Maschine Mikro works very well, certainly, and the reworked layout makes sense; but for those used to the truly instant operation of the bigger box, some manoeuvres do seem like a faff in comparison.

More annoying than that, though, is the slightly bizarre inability to record parameter automation from the hardware - it's back to the mouse for that, sadly. And having only one knob means you can only tweak one parameter at a time.

Still, that's the price you pay for… well, paying less of a price, as well as the reduced footprint and increased portability.

Interestingly, Mikro's pads are noticeably softer and smoother under the fingers than their Maschine counterparts - a tangible improvement over something that we didn't even realise needed improving!

Maschine has been able to host VST and AU plug-ins since version 1.6, which was released last summer. With the recent 1.7 update, owners of Komplete 8 can also enjoy Kore-style aggregation of all their other NI plug-in presets within Maschine's browser.

As individual updates are released in the near future, each of Komplete's constituent plug-ins will integrate in the same way. Presets are tagged by sound type as well as per plug-in.

Double-click one and it will be loaded into the currently selected Module, with the instrument or effect 'invisibly' loaded in the background. It's very cool, although it must be said that the process of importing your user-edited Komplete plug-in patches is more hassle than it ought to be - Maschine automatically sees only the factory presets.

To tempt you into dropping a wad on Komplete 8, Maschine Mikro includes the cut-down Komplete Elements suite, the presets from which show up in the Maschine browser just like the full package.

Elements comprises 3GB of sounds taken from across the bundle, hosted within the Reaktor 5 Player, Guitar Rig 5 Player and Kontakt 5 Player engines. There are some incredible sounds to be found in there, and if it inspires you to buy the epic Komplete 8, then so much the better.

Our conclusion will come as no surprise: in shrinking Maschine down to Mikro size, lots of controls have had to go and certain ergonomic compromises have been made. The lack of automation writing is something we sincerely hope gets rectified in an update, and there are still a few issues with the Maschine software that haven't been fixed (no mute automation, lack of multicore support, the often unintuitive nature of the Scenes system).

There are a few drawbacks, but Maschine is such a superb system that the positives far outweigh any negatives. For anyone looking to get into Maschine at a lower price-point, as well as current Maschine users looking for a more mobile (and, honestly, nicer-feeling!) complement to their existing hardware, Mikro is nothing short of a godsend.

With this fantastic, affordable new option on the table, we'd go as far as to dub Maschine a computer music essential, whether you go for the full thing or the sleek Mikro.