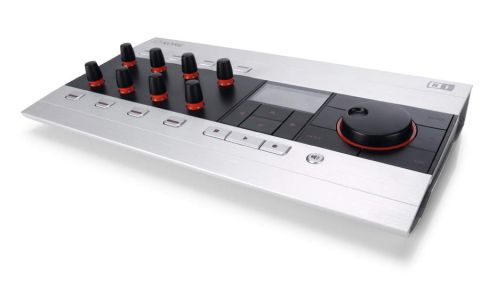 Still not for everyone, but Kore 2 is a good one-stop solution if you want polished presets and an easy way of tweaking them.

The original Kore was without doubt an amazing piece of kit but it left many folk scratching their heads. It comprised a software plug-in that hosted all of your other plug-ins and a controller that enabled you to tweak them.

However, on its own, it didn't actually make any sound.

Happily, Kore 2 features the audio engines from NI's Reaktor, Massive, Absynth, FM8, Kontakt and Guitar Rig. So, the no-sound issue has most definitely been addressed.

418 presets are included, with tweaks being possible using the revised Kore controller. However, you'll have to buy the full products if you want to build your own sounds from scratch.

That said, the presets do sound just as good as those you'll find in the software they're derived from, to the degree that you'll start cursing NI for deliberately handicapping the plug-in power behind Kore 2. But hey, it's not a charity y'know.

The easiest way to add genuinely new sounds to your Kore 2 setup is to buy KoreSound Packs, each with of which contains 200 sounds in Kore's KoreSound format. There are currently four packs available (Best of Reaktor, Best of Massive, and so on) and they cost 59 euros each.

So, a fully loaded Kore 2 is an amazingly diverse and powerful synth but there's even more fun to be had if you team it with more of NI's plug-ins. Purchase Kore 2 and Komplete 5 (NI's über bundle of everything they make) and you'll have 7,500 world-class sounds all catalogued and ready for you.

By storing its sound data as KoreSounds, Kore 2 operates beyond the boundaries of the individual synth elements themselves. Call up 'Alpine Flora' for example and there's no need to know that FM8 is running behind Kore's façade - a small FM8 logo gives the game away.

Tool up Kore 2 with Komplete 5 or a load of KoreSound packs and it really becomes the 'Super Instrument' its makers boast, able - via its integration with NI's expansive plug-in collection - to make any sound imaginable from those glassy FM8 textures to fat Pro-53 leads.

And because Kore 2 can host these engines in a single 'Ultimate Pad' MultiSound, the result of a search can just as easily be a stacked rack of multiple synths of every genre, combined to make something very large indeed.

Finding suitable sounds is a breeze using Kore 2's innovative browser. First employed in the original Kore, you turn on different parameters ('Processed', 'Organ', 'Bright', 'Film Music' and so on) and Kore 2 filters the results as you click.

Suddenly, from 7,500 sounds you're down to a 'final ten' from which to make your selection - something that's quick and easy when you have the new pre-listen button engaged, which lets you play and hear each sound without actually loading it in for full-on tweakage.

Controlling Kore 2's sounds is a cinch with the K2 controller (unlike its predecessor, this doesn't have a built-in audio interface). The eight knobs instantly map to the parameters that are most suitable for the currently selected sound. A knob could be called 'Grit' or 'Drive' or 'Sheen' or something as mundane as 'Frequency' or 'Attack'.

The morphing section, meanwhile, enables you to rack up eight different sound variations and not just crossfade but magically morph between them. If you're scoring a movie set on a deserted space station, your prayers have been answered.

Getting vast, evolving, epic sounds (or even full tracks) out of Kore 2 is laughably simple. Indeed, dialling through the KoreSounds on board it's hard to find something that won't rattle your speakers off their mounts. The accent is definitely on 'impressive' rather than 'immediately practical', with Kore 2's built-in effects used extensively to shape the sounds further.

A side effect of this is that sounds often have a surprisingly high processor load, so watch that CPU usage bar.

It's worth reinforcing the fact that Kore 2 works with any plug-in, too - not just NI's own. However, the process of turning your third-party presets into KoreSounds is both less 'auto' than we'd like and - frankly - a time-consuming chore that you could probably do without.

We also have a bit of a problem with some of Kore's classifications. Do you really trust Kore 2 when it says that it only has three suitable pad sounds? Three? Out of 7,500? Really? We regularly found ourselves stepping outside K2's browser suggestions - by switching off a criteria or two - and finding better options.

The basic Kore 2 bundle is fantastic: if you're thinking about buying a new soft synth to bolster your catalogue of sounds then you should certainly consider this instead. It's when you throw in Komplete 5 and dabble with adding non-NI plugs that things get more complicated and potentially more distracting.

We were never able to shake the doubt that Kore 2 had found all our sounds and, occasionally, certain favourites from the standalone plug-ins failed to appear, even when we specifically targeted them with laser accuracy in the browser. And don't even consider running Kore 2 on anything less than a Core 2 Duo (or equivalent) computer.

All things considered, though, Kore 2 is a blast. Auditioning and tweaking your plug-ins has never been more fun.