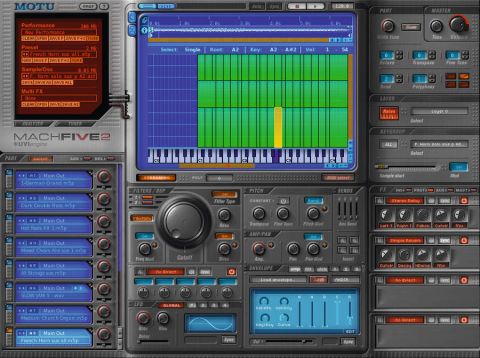 MOTU has stepped things up considerably with MachFive 2, making it not just a great sampler but a fine sound design tool too.

The original version of MachFive was one of the first truly 'monster' samplers, deserving much more of a splash than it received. And although NI's Kontakt has gone on to become the industry standard, Mark Of The Unicorn's effort was arguably just as cutting edge at the time of its release in 2003.

MachFive 2 is both a plug-in and standalone instrument, and in the former guise it's compatible across the board. All common formats supported: VST, AU, RTAS, MAS, DXi, for Windows and OS X (including Intel Macs).

Audio-wise, the sound engine has been tweaked, delivering up to 192kHz output for those who demand superior sonics. MachFive now offers "unlimited" multitimbral parts, polyphony and keygroups, all of which can be piled on until you run up against the limits of your system.

Return of the Mach

The main display of MachFive is much the same as before, with everything in one single window and the keygroup window expanding downwards, if required, over the synth controls.

In addition, there's now a full-screen edit window that makes sample and keygroup editing much less fiddly. And with the addition of layers as a third dimension, the large window display becomes more or less a necessity.

Layering is highly evolved, enabling you to set up 'rules' to govern functions such as keyswitching to bring alternative articulations into play - such as a guitar harmonic or a pizzicato string - all within the same preset. It takes the idea from GigaSampler, and the complex rules on keyswitching and dimensions from that program can be loaded into MachFive.

Compatibility is impressive: as well as Giga files, EXS24 and Kontakt formats can be read and reproduced, as can many, many more. However, on testing with EXS24, it wasn't always 100% accurate with keygroups and velocity layers.

It does read non-MachFive sample formats more quickly now, though, eliminating the 'import wait' of the first version.

A small button on the virtual screen switches the edit control panel into a mixer where you can apply insert and auxiliary effects and quickly balance up the preset channels. It's neat and is especially useful in standalone mode; in plug-in mode it actually encourages the use of single-instance multiple keygroup instruments within a host sequencer.

MachFive was one of the first samplers to give each and every keygroup its own filters, modulation and envelopes, and now the bar is raised further with the inclusion of a modular synth engine. Using either a raw waveform oscillator or an organ emulator complete with drawbars, you can shape your own sound using the filters, envelopes, and so on, and layer that with sampled sounds, if you so wish.

There are six available modulation envelopes per keygroup, and these can be conventional ADSR or multipoint affairs with unlimited breaks that can be synced to tempo, which is great for the sonic adventurer.

The palette of effects has been increased to 47, and now includes a convolution reverb. Although some effects, such as delays, sound good, with easy tempo syncing, others - such as amp emulation, distortion and auto-filter - can sound weak and thin.

As well as the four global and auxiliary effects per preset sound, you can also apply single effects to individual samples, which has huge potential for sound designers. For example, you can use the new Loop Lab feature to add reverb to a single hit of a sliced loop.

One annoyance we ran into is that there seems to be no option to automatically select the keygroup of the last note played - as you can with EXS24, for example - taking you straight to the relevant edit fields. Such an option would make editing patches a fair bit easier and quicker.

No sampler would be complete or able to compete these days without an impressive sound library, and MachFive 2 comes with a monster 32GB of samples spread across four DVDs.

One 8GB disc is devoted entirely to a Steinway concert grand piano that was recorded at William Tell studios in Paris, with sets of samples recorded in different ways to cater for a range of styles (such as rock, classical and so on).

With the new layering feature, using the sustain pedal switches to a layer of sustained samples, and releasing the pedal brings in a layer of release samples in which you hear the mechanical noise of the pedal - hyper-realism indeed!

The remaining three DVDs are dedicated to an orchestral collection that's licensed from the Vienna Symphonic Library; high-resolution kits and percussion, and surround instruments; and plenty of workaday material such as loops and various non-surround instruments.

Disk streaming helps to conserve RAM, and with today's ever-faster computers, most users shouldn't run into trouble. However, we did find that we exhausted our system's resources sooner than expected, with some glitches and hiccups occurring when we had five or six presets open at once.

MachFive boasts some deep improvements for the serious samplist. The sample-level processing features, the Loop Lab for slicing and manipulation and the huge library are just a few of the features that place it towards the top of its class.

Above all, though, the quality of the sample playback is fantastic and, with its capacity for expression, performers shouldn't feel limited. All you need is some serious computing power that can deal with its demands.