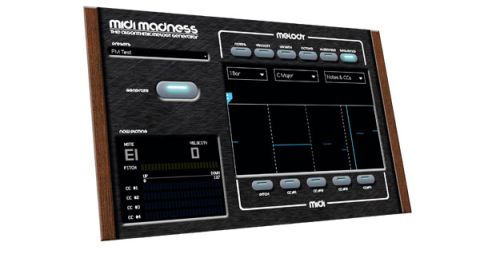 Perfect for creating experimental tracks/new ideas in existing ones. It gets better the more you tweak.

Midi Madness, an algorithmic melody generator, in its original form ran as both standalone software and plug-in.

The announcement a few months ago that it was making a comeback revealed that some problematic aspects of the first iteration will be addressed. The most obvious of these was that you couldn't hear any of the generated musical ideas in real time, which made the process somewhat laboured.

Let's rewind a little and see how the melody generation process works. Midi Madness generates MIDI phrases based on probability weightings set by the user in series separate modules.

The Notes module, for example, features a series of sliders above each note of a chromatic scale. Dragging the slider upwards for a particular note increases its chances of being included in the final melodic phrase.

A common scenario would see you push up the sliders for notes that fit the current scale. This is made a little easier by accessing the Chord Selector, which automatically assigns note weighting based on nine different chord types.

By specifying a key signature, the programme then highlights relevant commonly used chord types. The Length module uses a similar system of sliders to select the probability of a range of note lengths (or rest). There is also a range slider for staccato vs legato notes.

The Velocity, Octave and Humanise (note timing) modules use distribution curves where you drag the lowest and highest values and shape to determine the probabilities. A more elaborate variation on this is used to create controller curves for up to four simultaneous CCs and Pitch Bend.

The Sequence section is where all the magic comes together and provides a visual display of the final phrase (of between 1 and 32 bars). Longer phrases can make use of multiple note weightings to facilitate changing chord progressions.

The final phrase can be dragged from here into your DAW. However, if you're using the VST version of the plug-in, its output can be routed to a MIDI or instrument track, and this is where the process comes alive.

This new version is a better realised product in numerous ways (and is free to owners of v1), though we still have some reservations about the size and usability in some areas.

Midi Madness claims to be the "latest, sickest tool in EDM", but in our view this does somewhat oversell the software. However, while you won't necessarily get instant gratification, it is both interesting and useful - with a distinct leaning to the experimental end of electronica. Take the demo for a spin and see what madness ensues.