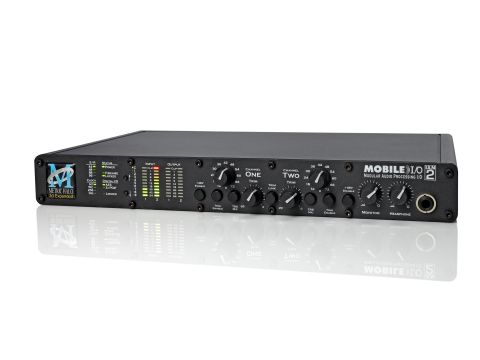 Not cheap but quality on this level never is. Great sounding and super-ﬂexible.

This compact, 1U rack-mountable interface promises much. There's plenty of I/O, comprehensive clock and digital recording and conversion options, plus the promise of its own native effects system in the form of the optional 2D DSP card.

The front panel is a busy affair with meters and LEDs aplenty to the left-hand side and parameter dials and buttons to the right. The latter principally concern themselves with levels for the analogue inputs round the back.

Mic and line level sources can be connected here with their gains adjustable at the front. There are separate 48V phantom power switches for each input. Additionally, there's a button to enable trim control and a trim dial for each channel. The trims can be linked, so that stereo operation becomes simplified.

To the right of these dials there's a master Monitor output section and a separate headphone level dial with its own port. Both of these outputs provide plenty of headroom.

The LEDs to the left keep you updated with the status of the unit, with lights for the current sample rate, the Clock master to which the unit is slaved (including 'internal' of course), the FireWire status light and digital I/O settings.

Round the back, you'll find a veritable mêlée of I/O options. Alongside the analogue inputs, there's S/PDIF I/O, AES/ EBU I/O, eight channels of ADAT optical I/O, Word Clock I/O, as well as the two FireWire ports, the power inlet and the main analogue outputs.

Recording quality on all channels is 24-bit/96kHz, which goes some way to explaining why this is an extremely high-quality audio recorder, signal converter and, as we'll see, digital mixer, as well.

One interesting point concerns the ULN-2's powering. The unit is bus-powered and will happily operate via a FireWire cable alone, once it has been booted up. A bit like a car's starter motor, however, the unit draws most power when it's first switched on and it requires more power than a Mac laptop can provide.

Accordingly, you'll either need to switch it on via the mains (before disconnecting) or, if you absolutely need mains-free operation, you can wire two 9V batteries together in series and connect them to the 9V DC socket on the unit's rear. It ain't pretty but it works!

Software and driver installation is straightforward, with drivers available to match the age of your computer and its operating system.

Alongside the driver, you'll also install the MIO Console software which acts as the digital mixing environment through which Metric Halo's interfaces work their magic. The mixer is completely configurable to match the requirements of your session, with channel strips, plug-in inserts, sends, auxiliary channels and the master section being immediately familiar.

If you're working in standalone mode you just configure, record and go, but if you're using a DAW front end, all of this mixer activity can still be yours to tweak, as a dedicated plug-in called ConsoleConnect forms the bridge between your host and MIO Console.

A huge part of the ULN-2's appeal is the fact that it can be expanded with the 2D DSP card, which really does produce some staggering results. Effects can be configured as part of your MIO console setup, and as this nifty piece of software works as a virtual mixer, you're on familiar ground as you configure the routings of your choice. Insert and send effects are on offer, with up to 10 inserts available per mixer channel.

As for the effects themselves, these are of a universally high quality. Of particular note is the MIO Channel Strip which combines gating, compression and EQ, with a range of sidechain options for each stage of the process.

Elsewhere, the Halo Reverb is flexible, the delays work wonderfully, while there are also dedicated menus for amp simulation and mastering setups. There are a number of template mixer setups, too, which is helpful when you're trying to get to grips with the MIO console and its vast potential quickly.

For most people intending to use this box for recording, the primary concern will be the sound quality of the preamps and, in this respect, the ULN-2 excels. The sound is pristine and there's so much headroom on the channels that I can't think of a situation in which this box wouldn't capture phenomenally clean, clear sound.

If you want to add to the signal ﬂow with third-party dynamics or effects processors, each input also features its own insert send and return, for which the range of applications is wide.

The ability to deliver great-sounding audio should be the central aim of any self-respecting audio interface and in this fundamental area, the ULN-2 delivers - and then some.

In fact, the quality of the recorded results here pole-vaults Metric Halo's latest offering straight into the big boys' league, where it not only holds its own but comfortably out-performs much of the competition.

The I/O options ensure that even the most demanding pros are catered for but it's in collaboration with Metric Halo's DSP card and its comprehensive suite of plug-ins that the ULN-2 really comes to life.

This is a seriously impressive interface if you're looking for a high-quality audio solution and you've got some wedge to spend.