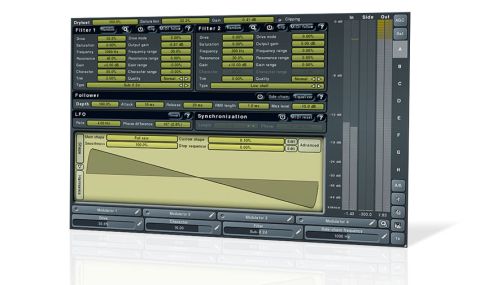 Although aimed foremost at bass music producers, MWobbler's extensive bag of tricks could find favour in any genre.

From jungle, DnB and breaks to electro, EDM and dubstep, LFO-modulated filtering is a production staple that just won't go away, and MWobbler is a plugin (VST/AU) built specifically to cater for this enduring sonic predilection.

MWobbler is operated through two main viewing modes: the first is Multiparameter mode, the other is the more complex Edit view. And there's a lot to edit. Put simply, MWobbler comprises two multimode filters, with, primarily, an LFO generating the wobbling, but there's an incredible amount of tweakable stuff going on in the background.

Each filter offers an almost overwhelming 98 filter types: with the usual low-, band- and high- pass joined by a vast array of harmonic, comb, diffusing and morphing filters (plus many more), it goes way beyond your basic 'womp-womp' and 'wah-wah'.

In addition to standard controls, the filters offer further wobble-enhancing aids such as saturation, drive, resonance, modulation range and various type-dependent controls, the first two in particular bringing noticeable flavour to the wobbling filter. There's also a Quality setting for trading off quality against CPU hit, and another cool wobble-centric option in the shape of Trim, which sets a minimum cutoff value to limit the modulation.

The other main sections are LFO, Synchronisation and Signal Shape, which are where the actual wobbling is generated, the latter being used to monitor and adjust LFO shapes or harmonics using a graphical editor.

All of Melda's new plugins come with four identical modulators, each hosting Normal (LFO), Follower, Envelope, Random and Pitch sections. In MWobbler, these can be used to very powerful effect, adding a new dimension to the basic LFO-based wobbling action. Minimal, glitch and ambient producers will be particularly taken by this feature.

Another Melda staple particularly well suited to MWobbler is the ability to assign preset switching to a MIDI controller (a keyboard's modulation wheel, say), which is great for hopping between effects when playing live.

Of the many remaining features (we don't have space to cover them all in detail), the most important are probably external sidechaining, enabling you to use any external input as a modulation source, and the envelope follower, which includes smoothing controls. Preset quick selection and morphing are also tasty touches. MWobbler offers a highly illustrative cross- section of about 250 presets, and it's well worth going through them to learn the ins and outs of the controls.

If we have one major criticism, it's the CPU drain, particularly (though not exclusively) when you use upsampling to mitigate the aliasing that can otherwise creep in. If you take MWobbler on the road (and the excellent performance controls mean you might want to), it can really guzzle your laptop's resources, potentially leading to glitches if you let it get too out of hand.

MWobbler is, obviously, a one-trick pony, but that trick is highly entertaining and far more versatile than you might think, in both studio and live use. Even if you're not a fan of in-yer- face LFO-antics, you could almost certainly find other uses for it, so we'd wholeheartedly recommend trying the demo.