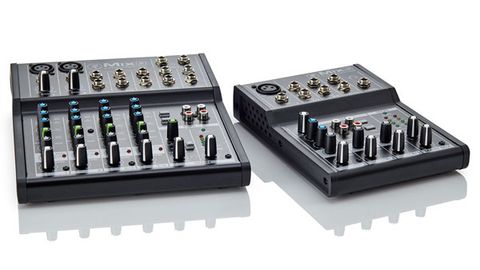 For many years Mackie has produced affordable, reliable analogue mixers, with the current flagship ranges such as VLZ and Onyx still delivering excellent sonics, rugged build quality and in some cases, audio interface connectivity.

Its latest live range, the Mix Series, is unashamedly affordable and primarily aimed at those situations where a convenient, low profile mixer is needed to blend a few signals. This could be in a simple live or basic studio situation, keeping the applications of these mixers pretty general.

Mic preamps are said to be 'studio quality' but they are neither Onyx nor Vita, which are Mackie's two premium branded preamp designs.

The Mix8 is a straightforward design. The channel configuration is two mic channel strips and two line level stereo channel strips. The eight channel count is achieved via a mono out stereo return auxiliary, which includes dedicated post fader sends on all four strips, and a dedicated Auxiliary Master return.

All channels include three-band EQ, with a mid peaking band (+/-15dB at 2.5kHz). Input gain is only available on the two mic inputs, but all four channel strips have overload LEDs. There's also proper 48V phantom power, switched globally via a switch in the Main output section.

The Mix8 augments the stereo Phones output with a separate Control Room output (on a pair of TRS jacks), although these both share the same CR/Phones level control.

Although pretty simple, the Mix8 feels more flexible than its little brother, the Mix5, and at a push the Aux send could be used to buss off a solo or blended mono mic signal - just remember, it's post fader.