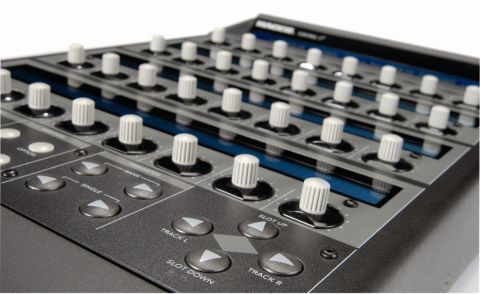 Mackie's C4 finally gets the software support it deserves, but its steep price will deter many.

The hardware controller has been around for good while now, since Emagic's Logic Control (which later became the Mackie Control Universal) hit the shops. And here we are, presented with the Mackie C4, a unit that's been around the block itself.

But the C4 lacked software support for a much of its early life and now that support is forthcoming from Logic 7, Sonar 4 and Mackie's own Tracktion 2, the C4 could be become the knob tweaker's control surface of choice.

The V-Pot design on the C4 offers 32 of them, arranged into four rows of eight. It's designed to sit alongside other controllers like the Mackie Control Universal and XT, so you can build an extensive controller surface for your software.

However, the Mackie C4 isn't simply limited to working as an add-on; it can also operate on its own with the above-mentioned software packages.

Much like its siblings, the C4 uses MIDI to communicate with your computer. The upside of this is everyone has at least one set of MIDI In/Outs.

The downside is you need a pair of MIDI connections for each control surface you use, and they don't have any MIDI Thru ports on the back. So, you may need to factor in a decent MIDI interface if you're planning a big set-up.

The C4's knobs aren't touch-sensitive, but a quick push achieves a similar effect. And if you'd rather cursor your way around, 'tracks' and 'slots' are the generic terms they've used on the navigation buttons in the bottom right hand corner.

With its grid-like layout, the C4 would seem best equipped for fiddling with plug-ins, whether they be processing or instruments.

However, because it's an open system, it's up to the software developers exactly how they assign the functions, and as we'll see, this varies considerably between packages.

Bear in mind though, the LCD scribble strips will always keep you informed about knob functions.

So confident are Mackie of the C4's ease of use, that the quick start guide is just two sides of A4. You'll need your software manual too, though.

I tested the C4 in both Logic 7.1 and Tracktion 2, and in both instances, the included control surface preferences made installation a doddle.

Having found the installation process so simple, I had mixed success with our two applications. Tracktion, as you might expect, turned out to be the success story.

Although the C4 is designed for plug-in editing, the integration is such that in Function mode a whole load of operations, from transport controls through to cut, paste and so on, have been assigned to push-buttons.

This makes the C4 a suitable choice as an all-in-one controller surface.

Interestingly, access to plug-in settings seems to be via the Marker rather than Channel Strip function, but it's pretty self-explanatory.

Plus, you'll find that Track mode (which basically gives you level and pan for all channels) also turns part of the scribble strip into a meter, which is a nice touch.

In Logic Pro 7.1 I had slightly less success. Although the C4 appeared in my control surface preferences with no problems, in practice it was clear that the C4 and Logic weren't operating in sync.

This meant that I could tweak plug-ins and instruments, write automation and so on, it's just that the C4 and Logic didn't necessarily show the same plug-in!

The incredibly annoying thing here is I can see Logic's potential. With various different parameter views available (including a split one) and button-press access to its tools, the Logic support has plenty to offer.

The key to the C4's success clearly lies in the hands of the software companies that choose to support it.

However, having spent a few years on the touchline, you've got to hand it to Mackie for continuing to keep the C4's prospects alive.

More compact than the Control Universal and clearly built to last, its cross-application design means it can be used in a number of ways.

And as its implementation in Tracktion 2 shows, this doesn't have to be limited to plug-in parameters.

Even so, it's still a very expensive remote control, which will set you back more than the software it controls.

You'd need to use it for some considerable time to decide whether or not it's a must-have item, and certainly we'd want to see a more successful operation in Logic 7.

Furthermore, in a world driven by the stability of your underlying software package, you may want to ask whether you want to add yet another level of complexity to your system.