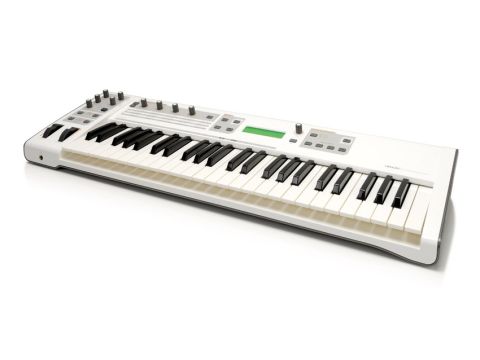 The Venom is a good deal more synth than meets the eye, so be careful - this baby bites.

M-Audio has built up a thoroughly deserved reputation for building high-quality keyboard controllers. Whether you're a studio based musician looking to control a raft of DAW plug-ins, or a live player wanting to trigger and drive sounds from a combination of performance controls, there's something among M-Audio's product pages for you.

Click to a different part of M-Audio's website and you'll also see a raft of audio interfaces too. M-Audio made its name producing high-quality, affordable interfaces and, of course, with the success of the M-Powered relationship some provide highly desirable Pro Tools integration.

M-Audio has experimented with keyboards that also provide audio interfacing before, through products such as the KeyStudio. However when Venom, the subject of this review was unveiled at NAMM, it wasn't the combination of keyboard and audio interface that had everyone buzzing.

The excitement stemmed from the fact that this is no mere keyboard but instead provides M-Audio's first foray into true synthesizer territory. Here, then, is a keyboard controller, a USB interface, a synth with a collection of sampled onboard synth sounds, audio input, performance dials and lots more besides.

Venom features a 49-key keyboard with a nicely weighted touch. The front panel is dominated by a printed matrix of parameter controls with four knobs and one button above to modify the relevant parameter of whichever row (of six) is currently selected.

It's a system that has been adopted by other synths and UseAudio's Plugiator immediately springs to mind.

To the right, there's a generous and bright LCD display with Mode buttons to toggle between Multi and Single sound modes, Patterns and a Store button to make changes to sounds you've made yourself permanent.

These control the Master volume, the Synth volume, gain controls for the microphone and instrument inputs (both with signal present and clip level LEDs) and a Direct Monitor control to balance input and output signals.

At the back, you'll find the physical ports to enable instrument and microphone inputs as well as Sustain and Expression pedal ports. The MIDI trio of In, Out and Thru are joined by a USB port for audio interfacing and instant DAW integration of keyboard data signals while a 9V power port completes the line up.

M-Audio clearly thought long and hard about how to make their first foray into synthesizer production and they've made a sensible choice when deciding how to pack this instrument with great-sounding patches.

Each one of the 512 single programs has, at its core, at least one sample of a classic synthesizer or drum machine waveform.

The architecture of the synth section is three-oscillator, with each able to access any of the 41 'pitched' samples or 53 drum sounds. It's a potent mix. The sounds are wonderful but the unique M-Audio twist is that there's a tube saturation stage at the multi-mode filter which can be overdriven.

This means that as well as being able to offer multiple filter modes (low, high and band, 2 and 4-pole, either 12 or 24dB of roll-off per octave) it's possible to internally distort signals.

This is reflected though the exceptional presets where the Venom name justifies its presence on the synth casing - these sounds positively burst out of the speakers.

There's a collection of speaker-wobbling basslines, an array of piercing and spiky lead sounds and oodles of attractive arpeggiated sequences, most of which ally musically-useful parameters to the modulation wheel and velocity as well as the editing possibilities afforded by the Performance Control set of dials.

It was important M-Audio got the synth side of Venom right and we applaud them long and loud for their efforts. Additionally, each program can access three LFOs, three AHDSR envelopes and 16 separate modulation routing options, while effects provision comes in the form of two buss effects with Reverb, Delay, Chorus, Flanger and Phaser options.

If you want to use Venom in multi-timbral mode, you need to be aware that polyphony is limited to a slightly disappointing 12 voices, though the effects provision does increase in multi-timbral mode with the addition of one of EQ, Compression, Distortion, Bit Reduction and AutoWah on each part at the Multi stage.

While there are 30 parameters accessible from the front-panel matrix, serious sound designers will be pleased to discover that Venom benefits from its own software editor, named Vyzex.

At launch, this transfers all data from Venom into the application, so you can pick any program, even one you've created from the front-panel alone and begin a more in-depth edit.

On the first 'page', you can choose waveforms for each of the three sources at the oscillator stage with graphical displays, as well as much more easily modify global filter settings and envelopes for amp, filter and pitch.

Subsequent pages let you assign and configure LFOs, modulation sources and effects while the Multi Mode editor is similarly comprehensive, with options to set key ranges for each part graphically, assign different arpeggiator patterns to each part easily and so on - the possibilities are almost endless.

Vyzex is well designed and opens Venom up to much more sound programming.

There are three arpeggiation modes: Standard, Phrase and Drum, with Standard offering classic up, down, up and down or repeated chord arpeggiation, Phrase triggering a stored Phrase pattern and Drum triggering one of 51 internal patterns.

The extent to which you can modify the Arpeggiator from the front panel is deliberately restricted for ease of use purposes but you can do much more via the Vyzex software.

However, if you're not sold on the internal patterns, you can import a MIDI file pattern instead. This is done via Venom's Control Panel and it's a fairly simple task to browse to the file of your choice and then transfer the pattern across to the synth.

You can set the target channel the pattern will send to, choose its start point and duration, even the Root Note of its destination. It's a great system that works very well.

Venom's audio interface is also of a very decent quality. The inputs on the back for microphone and instruments are self-explanatory, while the RCA phono inputs can be used to route any stereo audio into Venom.

The latter option inserts audio before the filter, so effectively replaces the oscillator stage but benefits from Venom's synth engine and all of the effects thereafter. It's possible to use all four inputs at once, though be aware that as only two inputs are available over USB, any signals coming in via the left side of the stereo input will be mixed with the microphone input, while the right-hand side shares the instrument one.

Venom spits out audio at highly the respectable quality of 44.1kHz/24-bit and, for Pro Tools users, the good news is that it's compatible with M-Powered versions of the software.

The lack of hardware restrictions announced with version 9 of Avid's flagship software means that Venom will operate with that system too but if you're happy with version 8 and would rather spend money on a keyboard/synth than upgrade your software, M-Powered compatibility can't be bad news.

There's a pleasingly no-nonsense approach to the Venom's audio interfacing, as the instrument and mic gain dials are mounted on the top panel rather than being buried in menus, like some other interfaces.

You might not need another interface but we predict you'll end up using it somewhere.

We're going to be honest - Venom massively exceeded our expectations. When we first heard about it we didn't expect the sound set to be anywhere near this good and we even feared that the 'synth' part of this instrument might be tokenistic.

M-Audio could have been bolder with the styling - if you're going to build an instrument called Venom it should look it might bite you - but it's equally fair to say that once you've used these sounds in your productions or onstage, no one will care what the instrument producing them looks like.

Blame their popular Axiom series of keyboards for the rather stuffy and neutral appearance.

Looks aside the immediacy of accessing the sounds and modifying them in real-time is intuitive and impressive, while for sound designers, the Vyzex software editor is just for you.

Audio interfacing is a welcome addition and the provision of audio inputs, albeit via phono ports, is a bonus.

This is a great instrument that we can even see some people buying just for its sound set alone. For others, it's one you can build your DAW-based studio around. Whatever your needs or intentions, we rather suspect Venom might exceed your expectations too.

Now listen to our audio demos to hear some of Venom's presets in action: