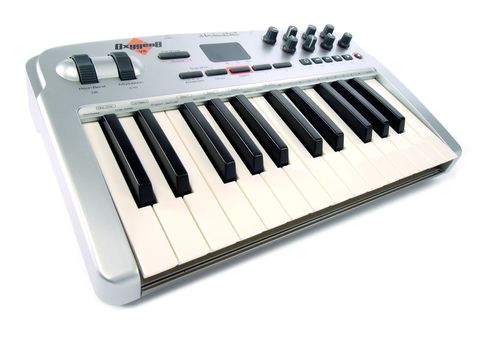 The original Oxygen 8 was a clever little box of tricks and won many fans with its tiny form, array of knobs and elegant USB connection. These days, however, many similarly-small MIDI controllers offer comparable functionality.

So M-Audio have gone back to the drawing board and come up with a new version. Gone is the vaguely unattractive old styling, replaced by a chunky design with a tasteful silver, grey and orange colour scheme. Despite the fact it's made entirely out of plastic, the v2 looks great, and is certainly a hell of a lot nicer than the old version.

The unit is light, even for its small size, and the lack of anything that looks breakable or a cumbersome power supply makes it portable indeed. You could chuck it in your rucksack or record bag along with your packed lunch without worrying about getting a hernia or snapping off a joystick, so it definitely gets a thumbs up on the portability front.

The keyboard is a dinky little 25-key affair, but at least the octave switch is accessible. It's located above the key bed along with the pitch bend and modulation wheels in a clever space-saving move. The keys are full size and have a great response, and the pitch bend wheel snaps back into position in a satisfyingly brisk manner.

The best bits, however, must surely be those all-important knobs and the exciting new transport buttons, located to the right of the unit. The knobs feel solid, but turn quickly enough for some serious filter cut-off tweaking, and are just gagging to be teased and yanked. The buttons are lovely too, and click satisfyingly when tapped.

The unit has ten memory positions that come preloaded with set-ups for various instruments and a couple of Reason set-ups. The downloadable Enigma software -- which isn't included on the CD and only receives passing mention in the manual -- comes with controller values for a variety of other instruments, though each parameter has to be dragged individually onto a graphic representation of the controller. Once a preset is complete it is transferred via SysEx to the v2, which is a painless process.

The only downside is that the package isn't as user-friendly as it could be. The manual doesn't go out of its way to ease the beginner -- a few tutorials would be more useful -- and Enigma could do with a 'basic' mode for one-click bank loading, though it's still fairly simple.

The package hangs together well despite the slight learning curve issue, and the Lite version of Ableton Live 4 is included so you can get tweaking right away. While this new Oxygen 8 isn't quite as revolutionary as its predecessor, there can be no denying it offers a lot of bang for your buck.

The build quality of the hardware is brilliant, it's great fun to play with and offers a depth belied by its simple appearance. Especially recommended to the mobile musician, the Oxygen 8 v2 is a great buy.