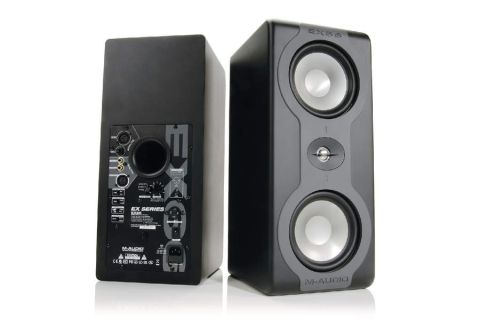 Well presented monitors with a solid sound, but not recommended for critical listening.

M-Audio gear has been around for a long time, and it's hard to think of an audio product that isn't listed in their comprehensive catalogue. The EX66s seem to up the stakes somehow, as they look very professional indeed.

Straight out of the box, they feel reassuringly weighty. The cabinets have rounded edges and the ﬁnish is neat. They're designed for vertical use only and feature two identical six-inch woofers parted by a central titanium tweeter with elliptical wave guide, to improve the horizontal HF dispersion.

Two blue 'power on' LEDs complete the uncluttered front panel. The speakers are a bass-reﬂex design, with the port hosted on the rear panel where there are also quite a few connectors and controls.

There are two sets of inputs: analogue and digital. The two analogue inputs are on balanced XLR and TRS jacks and can be used together, as they're electronically summed - the jack can also be fed by an unbalanced source.

A toggle switch allows you to de-select the analogue input on each monitor and choose either the L or R channel of the digital input as source
for the speciﬁc speaker.

Both AES/EBU and S/PDIF inputs are provided, and can accept sample rates up to 216kHz. There's also an S/ PDIF output, for linking to the S/PDIF input on the other speaker.

A volume knob adjusts the overall sensitivity. The EX66 has on-board 32-bit DSP, which not only takes care of the two-way crossover, but also provides a few user-adjustable controls, such as the room size and LF, MF and HF response.

Apart from some general listening,we used the EX66 against our set of KRK V6 monitors and the usual pair of Yamaha NS-10s on a mixing session. Set up was easy. A quick tweak at the level was all that was needed, and we left all the other settings on their nominal position.

The stereo image is great, and the bottom end is round and much tighter than on our pair of V6s - certainly more realistic and sounded more like a good pair of headphones. A quick listen on my Sennheiser HD-25s conﬁrmed this.

There's plenty of volume in the amps, but we were less impressed by the mid range, which we found hollow and lacking presence, particularly in the low vocal range. We know our KRKs very well and we do enjoy the slightly hyped mids, but the EX66s sounded really scooped in comparison.

We decided to correlate their sound to the PMC main monitors we have in another studio (which complement my V6s quite well, as they deliver tremendous bottom-end and a crystal-clear top), but we soon realized that the top end sounded a lot harsher than that - my only guess is that the titanium tweeter can sound very bright and metallic, and doesn't cover the crossover point too well.

The EX66 are honestly priced and deliver a solid sound. But at this price (that's £499 each) you're rubbing shoulders with the superb Genelec 8040s and KRK V8. Despite some harshness on the top end and a not-entirely-convincing mid range, they do offer a lot for the price however and certainly won't disappoint those who demand clarity and delivery.