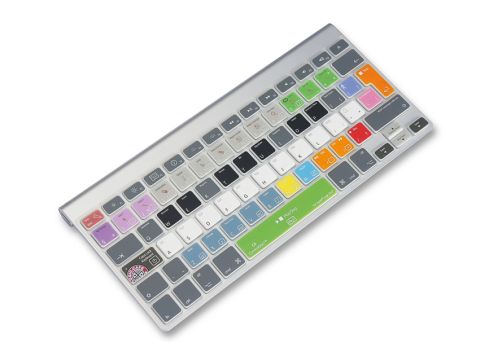 If you're on the road a lot or restricted to single-screen use, ControlSkin will turn your keyboard into an intuitive and comprehensive Logic controller.

There are plenty of keyboard overlays on the market that attempt to reign in the power of the DAW to your humble QWERTY keyboard, but ControlSkin from the chaps at Logic Café goes a little further, creating a whole custom Key Command patch file to match its multi-coloured guide.

The overlay sits across a MacBook Pro keyboard (or the smaller Apple wireless models) and after downloading and installing the patch file in Logic, it's capable of some pretty hardcore editing including single-button Region to Sampler conversion, Tap Tempo and instant and clear Screenset buttons.

If you've created your own custom Key Commands, or if you're used to the defaults, you'll need to either export your previous settings or commit to the Logic Café way of thinking, as they will be overwritten by Importing the downloadable patch.

If you do commit to the overlay's custom commands, you'll be pleasantly surprised at how intuitive it is - we were editing and moving around between windows, menus and views in no time.

However, the overlay is horrible to type on so you may have to remove it every time you want to use your laptop for anything else. Plus, £30 does seem a bit steep for what is essentially a piece of plastic and a custom patch file that anyone could download for free.