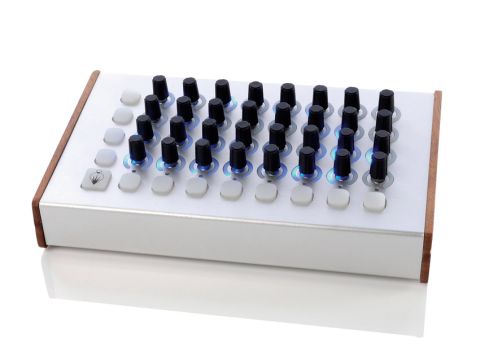 Code is for the select few. There's a lot of competition but if you are part of that few, the quality is clear.

Before Code, their most recent controller, Grid, was basically a controller with a button-grid layout and a few knobs thrown in - Code flips that concept over.

The experience of unpacking Code is a big part of what you pay for, as you make your first contact with the aluminium case, and the mahogany end caps. Code has 32 endless knobs and 13 rubber buttons - the knobs also function as push-buttons (like on the Kenton Killamix which, ahem, this reviewer designed).

Each knob has an LED ring that changes from blue to green as it turns clockwise, along with a white LED below that. There's a USB port for power and communication, and MIDI in and out jacks on the left.

Code doesn't need much desk space, and is USB class-compliant, so all you have to do is push those pizza boxes out of the way and plug it in. There are a couple of optional downloads - you'll need the Code Editor to change the default MIDI assignments of the controls, and to manage presets, and Ableton Live users can download a Python script that lets Code function as a Live control surface.

We added this to Live's MIDI Remote Scripts folder, and launched 8.2. Once it's configured in Live's MIDI Preferences, the familiar red rectangle appears, framing the first four tracks in Session View.

Code then has knob control over Sends A/B, pan, volume, and macros, and the main buttons run navigation and scene launching, while the knob buttons control transport, views and tap tempo, among other things.

If you 'click' a knob to launch a clip, the white LED underneath will light to show it's running. The Max/MSP crowd will more than likely love Code due to its open-source nature, much like they do Livid's other controllers.

In fact, this is a huge part of the Code's sell and Livid, either consciously or not, continue to appeal to the DIYers out there and less to the general music-making public.

Code's a beautiful thing, a good tactile experience, with a lot of visual feedback from the LEDs - there's also enough room on the case to label the controls if you want to.

The Ableton Live integration is a good move, although the default control assignments seem random. The knobs aren't speed-sensitive, which got annoying, that's our only criticism of the way it's put together - the real problems are elsewhere - the main one being the price.

£499 is a lot for a MIDI controller - the competition starts much cheaper. Three or four years ago Code would've looked awesome and would have stood proud in a same-same market, but things have changed.

Hardware and software hookups such as the APC range and NI's X1 and S4 mean generic controllers need to be incredibly versatile. That being said there are very few controllers out there like this and, for someone, this is the perfect solution. But the market for such a niche controller is small, and shrinking.