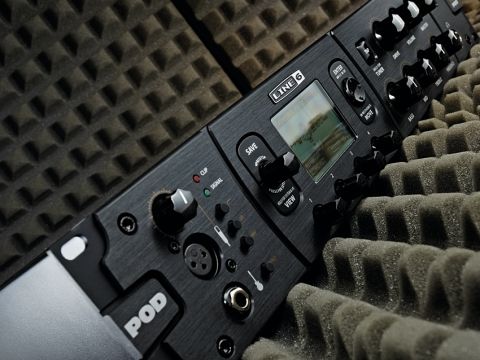 A solid choice if you want modelled amp and effects sounds in your studio or your live rack.

Back in the days when the only POD you could get was bean-shaped, Line 6 realised that a more sophisticated rack-mountable version with increased connectivity would definitely find its own audience.

The company looked to satisfy a demand not just among guitarists, but also from studios who realised that having guitar amp simulation and effects easily accessible in a processor rack was a no-brainer. Thus the 'Pro' version was born and has been through various incarnations, the newest being the POD HD Pro, which takes Line 6's latest High Definition modelling, as previously seen in the POD HD and the three floor pedal HD PODs, and puts it in a smart black 2U-high rackmount unit.

"Although there are only 22 amp models onboard, they have been carefully chosen along with the range of effects to give you a broad palette of vintage and modern guitar tones."

The HD Pro features pretty much the same range of facilities as you get in the HD500: there are 22 HD amp models and over 100 effects from Line 6's M-class processors. 16 speakers are also modelled and there are eight virtual mics to capture their sound.

All of the sounds are saved into 512 user-writable preset locations organised as eight set lists, each holding 64 programs in 16 banks of four. On top of all that there's also a 48-second looper (provided a Line 6 FBV Foot Controller is attached) and direct computer recording via USB.

The basic signal chain is constructed from an amp model plus eight effects blocks, each of which is capable of loading any effects model or providing access to an external effects loop so you can add other pedals into the chain at any point. The POD's internal architecture facilitates a parallel path for running two signal chains simultaneously should you desire it, with a mixer block permanently positioned at the end of the parallel paths to provide individual level and pan controls for each path's output. This enables the use of two amps together.

The POD HD Pro has a versatile array of connections on its rear panel, ensuring compatibility with a variety of analogue and digital equipment and the possibility of operation in any number of different scenarios. While using the unit in a rack could see you keeping some of the socketry permanently connected to key gear and minimising the clutter of trailing leads, the inclusion of both a front-panel guitar and mic input (with switchable phantom power, pad and roll-off) is welcome and equally neat, enabling easy day to day access for your sound source.

The clear blue display helps you easily switch between different views including one in which you can see the signal chain as a series of icons. While this is perfectly adequate for carrying out any editing, the POD HD Pro does have its own dedicated computer-based full-colour editor/librarian (available as a free download), which, as long as you are handy with a mouse, makes it all so effortless.

Software aside, though, the physical unit has six large knobs (drive, volume, bass, mid, treble, presence), for instant amp tweaking - you just grab one and all the parameters momentarily pop up in the display. Below the display are four 'soft' knobs for quickly adjusting parameters related to any amp or FX block, which are also easily selected and turned on and off by adjacent controls. There's also an easily accessible edit mode for access to all of the many editable parameters.

We've reviewed every one of the previous releases in the POD HD range and, as the sounds are consistent throughout the range, regular readers will know what the HD Pro is capable of. In short Line 6's HD modelling offers some excellent guitar tones with more detail and playability than was found in previous PODs.

That playability is more adjustable now, as a recent firmware upgrade has added eight variable input impedance options - seven discrete resistor values, or auto where the impedance matches that of the first amp or effect in your chain, creating a similar response to plugging into a real physical rig.

Although there are only 22 amp models onboard, they have been carefully chosen along with the range of effects to give you a broad palette of vintage and modern guitar tones.

What's more, an upcoming firmware update, which may have been implemented by the time you read this, is due to add new amp models - two Marshall Plexis, an Ampeg 'flip top' bass amp (with eight mic choices) and a vintage-voiced valve mic preamp. The update will also enhance integration with Line 6's Variax guitars and DT25 and 50 amplifiers.

As an audio interface for your computer, the POD HD Pro offers a pretty straightforward two inputs and two outputs, which may be adequate for most users but is disappointing considering that the previous rackmount model, the POD X3 Pro, offered up to eight inputs to the computer. This enables you to record the dry guitar sound to a separate track from the stereo processed sound - a belt and braces approach that is very useful, because you will always have the dry sound to re-amp if you decide that you don't like the processed tone when you come to mix the track.

OK, it's not a disaster and you can record both dry and processed sounds if you use the POD HD Pro's analogue outputs and a multi-channel external audio interface. But it's a facility that we think should be onboard considering how some people prefer to record their guitar these days and the fact that this is Line 6's HD flagship and the most expensive unit in the range.

On the plus side, though, it is versatile for recording more than just guitar or mic signals from the front panel XLR socket and mono or stereo line level signals via the rear panel jacks can all be recorded via USB.

The HD PODs all have a range of classy sounds, but which model you go for depends really on your proposed use of it and your budget. Where the HD300, HD400 and HD500 are more orientated towards live performance, the POD HD Pro is the unit you'd look for if you are running a rack system or want a neat unit for home or studio use. While the bean-shaped POD HD is also suited for home and studio use, the POD HD Pro offers increased versatility courtesy of the extra connectivity, features and form factor, not least the FX loop, phantom power for the mic socket and the line inputs.

While we'd have liked to see some more versatile USB connectivity, the fact remains that the POD HD Pro has the playability and sounds to satisfy a demanding variety of recording and stage needs.