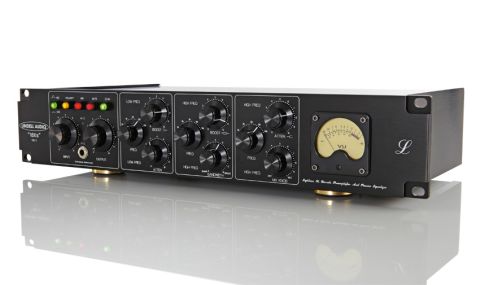 A simple design offering stunning quality and creativity across an huge range of applications.

While one flank of the pro audio is heading firmly down the technological route, cramming as much as possible into feature-heavy, ultra-low profile software driven units, the other flank is busying itself fine-tuning the best designs history has managed to produce, bundled into stylish, hardy units.

Lindell Audio is a company that falls firmly into that latter camp, but with a rather interesting twist - its stuff doesn't cost the earth. Since its arrival three years ago, Tobias Lindell's company has addressed initially the 500 series, and now standalone rack unit formats, head on with some sensibly designed engineer friendly tools that aim to squeeze the best fidelity from the available budget.

First up, although this is a MkII unit, before you go hunting for bargains, the MkI didn't actually make it to market as they decided to implement some modifications. So, this is the first production model of the 18Xs. It's made in the Far East, but with a small run philosophy and we have to say it's beautifully made.

A quick look under the lid and this could be the work of any bespoke audiophile outfit. The audio processing is all handled on one main PCB, with a couple of small raised boards handling the two op amp circuits for pre amp and EQ. Input and output transformers each get their own isolation casings, and the PCB and point to point wiring are all very well labelled. The rather hefty mains transformer sits over on the right, and the only other thing in this section is the retro style VU meter.

The 18Xs is a heavy unit and, aside from the mains transformer, this is basically down to the amount of metal in the case. Solid side and front panels of about 8mm made from attractive black brushed aluminium are the culprits. But even the slide-in lid could do some damage if you dropped it.

Lindell is so proud of the finish that it's rather amusingly included a pair of white cotton 'handling' gloves, so that you can maintain a pristine finish during installation.

The 18Xs is a fully fledged mic pre and passive EQ. At the left-hand end are the input and output gains, Hi Z instrument input with activation LED, and five backlit push buttons for mic/line, polarity, 48V phantom, mute and EQ in/ out. The middle section handles the EQ.

This is very similar to the Pultec EQP-1A, with a low frequency shelf, high frequency peak and low pass filter. Also Pultec-like are the independent boost and cut controls for the low band, and bandwidth control (sharp to broad) for the high peak.

Rounding things off is a parallel mix control that allows you to blend the EQ circuit with the line signal. Round the back are XLR inputs for mic and line, and two XLR outputs - one pre and one post the mix control.

The 18Xs is incredibly easy to use. Although the input gain isn't labelled in dB, the spec indicates maximum gain at 65dB, which is plenty for most situations. Spinning through a variety of mics including dynamics and capacitor designs, the sound is clear with plenty of headroom for peaks.

Even so, with a high output phantom powered capacitor mic, we found that we were using only the first eighth of the gain, so it would be useful to see a -10 or -20dB pad.

While we're on the subject of levels, the VU output meter is calibrated to 0VU = -10 dBFS. There is a tweaker on the meter, but frustratingly this doesn't allow much adjustment to lower operating levels such as -14 or -18dBFS.

The output mix control allows you to blend the selected pre amp signal with the line level signal on the back. In practice, you have no onboard control over the line level signal that forms this 'dry' component, and we can't see much use for it. It would be better if the dry/wet blend simply blended between the EQ'd and flat signal.

Sonically, this really is a lovely sounding unit. The mic pre is quiet and although not completely neutral, has a nice open sound. This can easily be enhanced with the EQ section which delivers all the expected functionality of a Pultec. This includes everything from twangy sharp boosting and gentle sweetening in the high frequencies, to round boosts in the lows. And combining boost and cut in the lows creates the expected dip above the frequency point. This is particularly marked at 100Hz, but less so at 200Hz.

However, the biggest revelation here is the instrument DI. This sounds excellent, with a lovely combination of low mid fatness and mid range space. Clearly the transformer stages are doing their job here, and when you factor in some EQ you can create punchy picked guitar or lovely rounded bass tones, without giving away the fact you're EQing at all.

It's hard to fault the sonics of the Lindell 18Xs, and, although we would like to see some design tweaks such as combination connectors and an input pad, we don't think those gripes are enough to become too negative. So, if you like a pre amp with plenty of sonic character, built like a tank, with good looks and a reasonable pricetag, this really should be on your list.