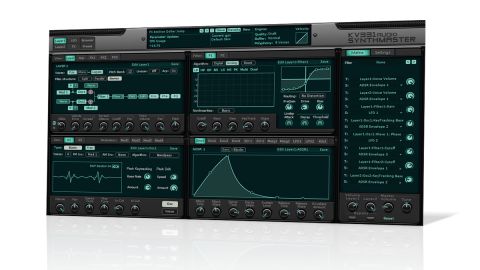 A multifarious and fantastic-sounding synth that still lives up to its name in 2015.

This semi-modular beast of a synth has enjoyed a steady stream of updates since our five star review of version 2.5, in which we labelled SynthMaster a 'desert island synth' for its magnificent sonic range and versatility.

In that time, the synth's popularity has risen, but fierce competition from the likes of Xfer Records' Serum, MeldaProduction's MPowerSynth, and Synapse Audio's Dune 2 have pressured KV331 Audio to continue expanding SynthMaster's already astounding palette of synthesis capabilities.

This latest update is perhaps the most significant to date, with improved analogue filter algorithms and new features in the oscillator section. Most notably, the Oscillator Algorithm field lets you 'warp' waveforms in various ways, chosen from a menu, similar to Serum.

This means that SynthMaster's old 'Tone' knob is now not just a low-pass, but a multipurpose knob, as you can select from seven 'Spectral' filter types as well as various other Oscillator Algorithm styles.

Other additions include a new Voices tab (which lets you dial in oscillator unison detune nuances) expanded Modulators (which can now be used as additional sub oscillators) and the Nonlinearities parameter in the filter section that offers three levels: Low CPU, Medium CPU and High CPU.

The Wavetable Oscillator display has also been updated - now the mouse wheel can be used to select waveforms for the 16 slots. Finally, preset banks can be saved out for use in the iOS version of SynthMaster.

This is a humongous update that includes new presets (tipping the total over 1000) and plenty of bug fixes. There are still a few minor bugs floating around, but none of these are showstoppers, and KV331 Audio assures us that the maintenance updates will continue to flow for the foreseeable future.

A multifarious and fantastic-sounding synth that still lives up to its name in 2015.