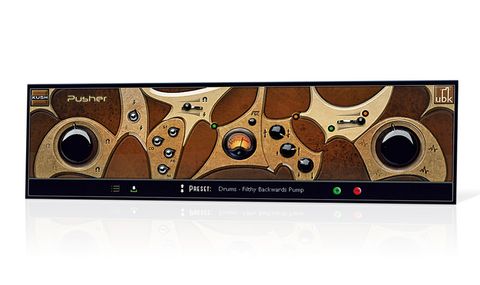 Combining characterful compression and saturation in one unique plugin, Pusher is futuristic, versatile and performs superbly.

Kush Audio's small but intriguing range of plugins focuses on innovative methods of signal processing for general mixing purposes. Pusher (a "Magnetic DSP Colorbox") is the third in the series - a unique effect based on a saturation processor followed by a dynamics stage.

Although it vaguely resembles Kush's debut plugin, the UBK-1 compressor, Pusher (VST/AU) is much more focused on the colouration brought about by its saturation, with compression thrown in as a very welcome bonus.

When you first load up Pusher, you're greeted by the Cheat Mode, which labels every control and supplies brief descriptions of many of them. This is useful to the point of being essential, really, since the main controls are labelled with symbols instead of words, and the manual is just a one-page PDF. You can still adjust all of the controls whilst in Cheat Mode, incidentally.

At the heart of Pusher are four "magnetized metal Cores" - Nickel, Iron, Cobalt and Steel - each with its own particular colour of saturation. The four are mixed using their individual level controls, and how much of their combined effect is imposed on the input is determined by the main Flux Drive control.

The Nickel and Steel Cores produce mostly even harmonics, like classic valve gear, while Iron and Cobalt generate mostly odd harmonics, more like transistors. Notably, Steel and Cobalt are like more aggressive versions of Nickel and Iron, respectively.

There also seems to be a level of complex and unpredictable interaction between the cores, whereby introducing more level on one can start to affect the colour of another. That'll be the magnetism, we guess!

The main technique behind successfully using Pusher, then, is balancing the four Cores in conjunction with the Flux Drive control. It's a lot of fun, and it works especially well on drums - Kush Audio refers to it as "Magnetic EQ", but that's an overly esoteric and misleading description.

Pusher can be used to add a subtle touch of vibrancy to the mid-range crack of a snare, thicken up the tone of a kick drum, or smooth the transients on overcooked hi-hats. Pushing up the Bias throws the Cores into overdrive, so the source material can be moulded into almost total distortion. Nonetheless, even when the Bias is leant on heavily, the sound retains a character all its own, since the Cores react to the input signal dynamically, producing unusual squelching artifacts at extreme settings.

At the less overt end of the scale, small pinches of the Bias control help to tame spikey transients for headroom optimisation. The Blend lever controls the mix of dry signal and distorted, "magnetised" output, so you can always smooth out the edges with some of the original sound.

Pusher is a powerful tool for adding harmonics to individual channels and busses in order to produce a rich mix that's full of life. It's creatively exciting, too, giving you plenty of options and avenues (rabbit holes?) to explore.

After a brief period of acquaintance, Pusher could well become one of your go-to plugins for adding attitude and magnitude to any and all kinds of source material, no matter what style of music you're making.