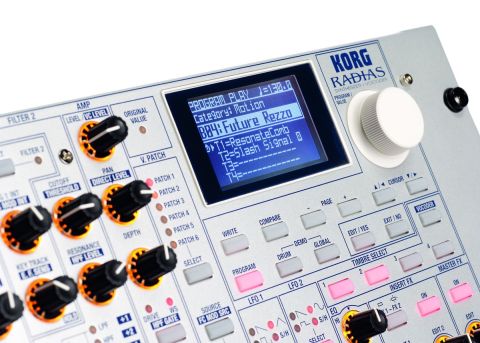 Back in 2000 Korg released the MS2000, which was widely lauded. It sounded great, looked fantastic, and despite its meagre polyphony managed to pack a sonic punch that found favour with studio owners and touring technologists the world over.

In 2003 the MS2000 was further improved and was re-branded the MS2000B. Three years further on and here´s the brand new Radias. The first impression one gets when unpacking this new synth is that the layout of the rack module bears more than a passing resemblance to the MS2000. So, are we dealing with brand new technology here, or the updating of a modern classic?

Despite the visual similarity, the Radias still manages to achieve a style of its very own. It arrives in two boxes, one containing the rack unit and the other containing Radias´ unique controller keyboard. This is the more unusual of the two packages, as it has the appearance of being only half-built! The front half of the construction houses the 4-octave keyboard, pitch-bend and modulation wheels, while the back half features only a metal frame.

The principle job of the frame is to support two moveable rack ears, which in turn house the Radias´ rack unit. Fitting in the latter is simple enough and once it has been constructed, with the rack screwed in, you´re able to tilt the rack to pretty much any angle that you want.

Whilst we´re talking ports, elsewhere on the back panel you get the MIDI trio, a stereo pair of outputs and two individual outs as well, plus connection to sustain and expression pedals. You´ll also find stereo jack inputs and an input for the included condenser mic if you want to get vocoding immediately. There´s a switcher button to allow you to select input between dynamic or condenser mics and line sources. The headphone port is found on the front panel next to the main volume knob. I would personally like to have seen this doubled on the controller keyboard, as its current position means that you´ll be lucky to escape your headphone cable draping itself over the keyboard when the rack module is titled upright.

Korg also enclose a metal shelf that can be attached at the back of the keyboard, next to the rack section. The manual suggests this would be a useful place to house a MIDI controller or effects processor. I suspect that it will prove a useful place for Radias owners to rest a brew/ashtray combination. Once you´re assembled and take a step back, you´ve got to applaud Korg for their design efforts. Some will hate it, but we found it reminiscent of the Minimoog with its pop-up fascia, and it also has a retro/industrial look which is reiminiscent of the set of a mid-80s Jean-Michel Jarre gig. (Is that really a good thing?).

The Radias´ appearance improves yet more dramatically when you switch on the power, at which point it triggers a light show to rival the attractions on Blackpool pier. Each of the unit´s black dials is surrounded by a bright orange glow, while function buttons toggle on and off with red bulbs. The LCD screen plays its part too, with bold legending against a blue-ish background.

The ‘technological´ exterior is matched by the range of sounds inside. Two minutes with this unit is enough to tell you it´s aimed at those wanting to make dance music, and whilst it attempts to cater to a wide number of styles within that remit it´s certainly a package to avoid if you´re looking for pianos, flutes and other ‘acoustic´ patches. If you like to groove, though, you´re in luck. Radias is packed with killer leads, sequences, arpeggiated patterns, pads and basses. In all, 256 user-editable programs are on offer - a small selection of which you´ll find showcased on the cover DVD. The quality and purity of the sounds here owes a great deal to Korg´s Multi-Modeling Technology (MMT), which was pioneered by OASYS.

The technology aims to eliminate aliasing noise even among the higher frequencies and it´s certainly the case that the sounds here sparkle. The programs are constructed via a now familiar system. Each timbre can be constructed from two oscillators, and up to four timbres can then be assembled to create a program. The polyphony on offer totals 24 voices, though this is often lower, as it is dependent on the complexity of your sounds. A dual-oscillator, 4-timbre program will quickly eat away at the total until notes will audibly cut off, so caution is advised.

The Radias features nine oscillator types, from familiar ‘analog´ shapes like sine, square and sawtooth waves to PCM waves, raw drum sounds and Korg´s own Variable Phase Modulation, which is a kind of continuing modulating oscillator. This then feeds the filter section, which offers two independent resonant filters. Filter 1 offers five filter types and filter 2 offers four. These can be run together, with both filters working on the oscillator combination, or can be run independently, with each filter taking an oscillator each.

As the filter type selector is a rotary knob without detented positions, it´s possible to find the ‘gaps´ between filter types, which introduces a kind of comb filtering, which, in turn, can produce some great results.

After this, we´re into the amplifier section, which offers some additional tools. ‘Drive´ adds a little distortion for sounds requiring extra power, whilst ‘Punch Level´ blends a square wave to the attack portion of the sound to increase the perceived dynamics of any program.

Both filter and amplifier sections feature their own envelope generator, which are the traditional four-stage affairs, though they do have editable attack and release curves, which offer some variation from the traditional linear ramps. Radias also provides two LFOs that can be routed to modulate almost anything. Six waveforms are available for both, though these waves can be further manipulated by a ‘Shape´ control, which modifies each LFO waveform.

Once you´ve designed your timbre and combined up to four of these into a program, the Radias allows you to get things moving via any one of a number of modulation tools. The first of these is the arpeggiator. Six arpeggiation modes are available from traditional up/down to random and alternating versions, which add some pleasantly unpredictable spice. Beyond the notes themselves, steps can be tied, swung and transposed up or down in octaves to produce anything from shimmering trance sequences to fully-programmed drum patterns.

Next, the Step Sequencer allows for the recording of two basic patterns and phrases. This will be a particular live favourite, as you could, for example, record a drum pattern and a bass pattern and leave these running while you either tweak their timbres in real time, or play another sound over the top. Each of the sequences can be up to 32 notes long, though this number can be doubled if you want a longer, single sequence.

If the Step Sequencers are concerned with generating pitch data, the Radias´ Modulation Sequencers deal with timbral shaping in much the same way. Three separate sequences can be configured to modulate any one of 41 parameters over 16 steps. Put simply, this means that 16 ‘events´ can be stored, through which any sound can ‘move´. Imagine 16 different values applied to the cutoff frequency, for example - as the steps progress, so the sound opens and closes. These steps can be smoothed if required, to provide sweeps, or kept jagged for more imposing sounds. The joy of three separate streams of data colliding and forcing your programs through a mangler is one that I´ll leave to your imagination.

At the end of the signal path a powerful effects chain lies in wait. This comprises two insert effects for each timbre and one master effect for the program. In addition, a 2-band EQ can be placed across the output to add extra weight or sheen to any program. The Radias offers 30 different effect types. The quality of these is very good and they quickly become an integral part of your thinking when putting together a program, rather than simply adding a little additional sprinkle on top.

All in all, the sound engine is capable of providing a great range of sounds, which would certainly cut the mustard in any number of genres and mixes. I really like the rounded bass end, but I´m equally drawn to the sheen and warmth of the mid-range and lead sounds as well, the latter of which will do some serious speaker damage if you need them to.

Radias advertises its vocoder status from the off, with the first sound in each bank of presets containing a classic ‘robot´-style voice dishing out any one of a number of (slightly cheesy) phrases. These elements are taken from the onboard samples, but it´s just as easy to get your own phrases going.

The Radias ships with its own condenser mic, and once you´ve connected it, it´s simply a question of selecting one of the Radias´ ‘vocoder´ ready programs and then pressing keys on the keyboard while speaking or singing into the mic.

The Radias also allows you to record 7.5 second long streams of formant information to memory, so you can produce vocoder-type sounds without the mic connected. The preset programs contain starting points that make it easy to find the sound you want, whether it´s floaty pad/voice combis or more traditional robot tricks. You can also use the stereo audio inputs to process any other sound, so effectively the Radias can act as a filter module and/or effects processor for any sound you feed it.

So, what´s the answer? Is the Radias a stunning product containing new and exciting technology, or an update of the technology introduced with the MS2000B?

Well, it´s a bit of both, to be fair. Yes, it stands on the shoulders of the MS2000B, but also manages to up the game and add some interesting colours to the sonic palette along the way. The sounds are sharper and polyphony has been improved. Whilst the latter is still not overly generous, it´s a welcome addition.

The effects section is perhaps the one area that has been modified so dramatically that comparisons with the MS2000B are irrelevant and it´s certainly great to have this extra functionality onboard. Visually, the unit is stunning and Korg deserve full marks for such a bold design.

There´s no question that if you´re in the market right now for a ‘dance´ synth with bold sounds and flexible sound-making tools, you should add the Radias to your ‘must try´ list. My advice, though, would be to check out the MS2000B as well. The choice is yours.