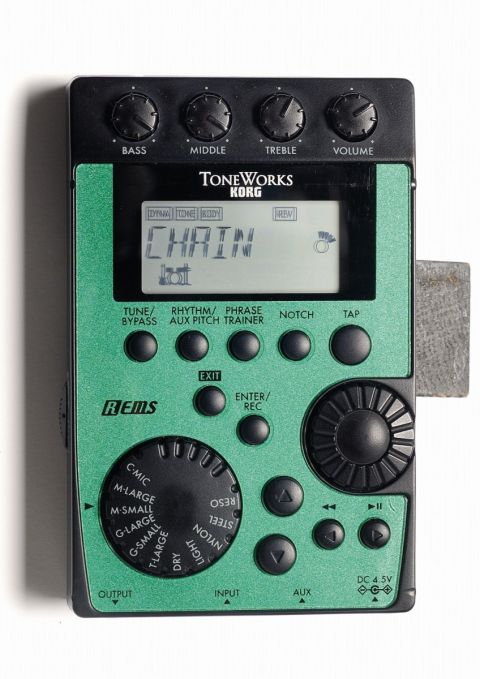 These two units are great for anyone who wants to do a bit of silent headphone-led practice and are also very useful in providing a variety of useable tones for home recording. The small size and battery power makes them an ideal travelling companion (along with a lead and some compact headphones) to slot into a guitar case or gigbag. Very practical little units and a real steal at the price.

Korg´s Pandora personal multi-effects processor series has been a great success in giving guitarists a pocket-sized plug in and play practice facility, so much so that Korg has now added two more models to the line-up.

Firstly, there´s the PX4D, the first in the Pandora series to put functionality for guitar and bass into one unit. Then there´s the PX4A, which is intended for users of electro-acoustic guitars with the intention of using its modelling capabilities to transform the often sterile sound of a piezo pickup into more of a natural acoustic sound.

Both the PX4D and PX4A are about the size of a pack of playing cards and have several common features. Each of them can be fixed to an instrument strap via a holder, and both units feature an onboard tuner, an easy to read LCD display and a knob-based interface to enable quick and intuitive editing for the user. To provide some self-contained accompaniment to play along to, each unit also has 100 built-in rhythm and bass patterns - although if you don´t want bass it can be easily turned off. The bass patterns let you specify the key and, while some basslines are static, others follow a very short and simple chord sequence.

Sixteen rhythm patterns can be combined together in a chain if you fancy some variety in a sequence. Further practice opportunities are presented by the presence of a phrase trainer whereby you can record for up to 30 seconds from an audio source such as a CD, MD or MP3, and play it back repeatedly (looped) at a slower speed without changing the pitch - a painless and very useful way to learn fast or complex passages. There is also the option to record your own playing along with the rhythm accompaniment and solo over the top of it. External audio sources can be mixed, via the aux input, directly with the Pandora´s sound and, to make playing along easier, there´s a ‘key transpose´ function to change the pitch of the song upward or downward by as much as one octave.

One extra related feature on the PX4D is a ‘bass canceller´ function that erases the bass sound from an external audio source so that you can play and hear your bass along with the song.

The PX4D has a massive 200 programs on board (100 preset, 100 user) with sounds suitable for both guitar and bass. Each program consists of an effects chain that is made up of seven modules - dynamic, amp, cabinet, modulation, delay, reverb and noise reduction. There is a large choice of options for each module, in all there are 158 effects types including 25 amp types with just about all of the well-known favourites, and then some more, covered and 23 cabinet types. Having elements for both guitar and bass onboard, there are plenty of opportunities to create some hybrid sounds such as a guitar amp coupled to a bass cab.

As far as the dynamic and modulation effects are concerned there is a wide selection including all the standard stuff like compression, wah, tremolo etc, but then there´s also guitar/bass synth, a talkbox effect, intelligent pitch shifter, a slow attack effect for creating swells and another effect for creating feedback. Bass players might like the fretless effect, which simulates the sound of a fretless bass from a fretted one.

Continuing in the tradition of the other units that use Korg´s REMS modelling, the PX4D has a massive variety of preset sounds to suit all playing styles. Editing any program is as simple as just stepping through the modules and choosing a sound for each one from the menu. If it´s just the amp model that you want to change, 11 of them are instantly selectable from the large rotary switch on the front panel. Sound-wise, while no one is likely to claim that the Marshall or Fender simulations contained within could ever compete with the real thing onstage, the PX4D certainly conveys enough of the sonic character for headphone practice or as a practical substitute on home recordings. Plug in and you will instantly want to play, with all the different sounds and drum patterns inspiring you to stretch into new directions - no bad thing at all.

Being designed for use with electro-acoustic guitars, the PX4A uses its REMS modelling capabilities to emulate the sounds of real acoustic guitars, from old classics to modern examples, contained in the 100 (50 user, 50 preset) programs. Resonator, nylon-string guitar and banjo also get the modelling treatment. The resonance and character of acoustic instruments are reproduced here by modelling based on such factors as body size and construction. The sounds are the sounds of an acoustic instrument mic´d up, so some incorporate modelled mic positioning to simulate a sense of space and depth. Each program is made up of a chain of eight modules - dynamics, mic/body, modulation/filter, delay, reverb, tone, notch and noise reduction. Each of the modules has a choice of effects, with the mic/body effects probably contributing the most to the sound with representations of large and small-bodied Gibsons and Martins among the others.

In the modulation/filter section, alongside the usual chorus, flanging and tremolo, are some more specialised effects - one makes a guitar sound like a 12-string while the other can replicate the drone tones of ethnic instruments like the tambura. It is often difficult to get an electro-acoustic at a decent volume through a live PA before the onset of feedback, and some juggling of the EQ is usually necessary. One of the modules - ‘auto notch´ - is particularly appropriate for live use. It´s a function that can automatically detect when an instrument is going to feed back and can help prevent that by notching out the offending frequency range.

Whereas the PX4D has an obvious practice function of amplifying an electric guitar, any electro-acoustic will have some acoustic sound of its own, so the idea of just plugging in and using the onboard sounds in the PX4A for practising is not quite as appealing. You´d have to turn everything up pretty damn loud to not hear the natural acoustic sound. However, if take advantage of the onboard rhythm machine and the phrase trainer then this makes much more sense. There´s also plenty of functionality for live work and recording.

The sounds here are more difficult to evaluate than the more familiar amp sounds, but there is a great deal of variety on tap and the modelling can really transform the sound of your electro-acoustic to evoke the flavour of a different mic´d-up instrument. The PX4A, therefore, greatly increases the options available to any home recordist who doesn´t have the facility for proper mic´ing. There are also plenty of effects available should you wish to stray away from the conventional - wah-wah acoustic anyone?