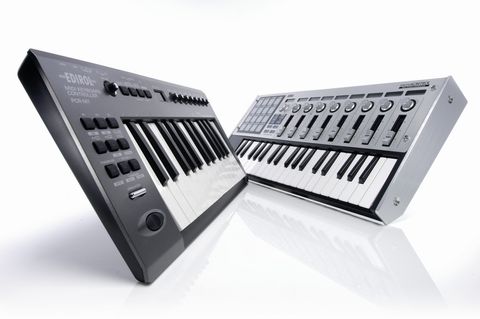 Ruggedly-built and with many powerful features, this is worth a look if you can handle mini keys.

The MicroKontrol has a whopping 32 keys, but they´re miniature keys, which may be off-putting for those with fingers on the plump side.

But it does have a set of velocity-sensitive pads that can be used to trigger percussion patches, or for other purposes, such as entering numeric and hexadecimal values and programming the device in many of its various modes. There´s also a joystick to which numerous controllers can be assigned, including pitch-bend and modulation, as well as aftertouch, velocity and more.

There´s also a multi-function Value dial with a tempo indicator and major mode keys. To the right of the MicroKontrol, you have eight rotary encoders and eight sliders that can be assigned to different MIDI messages, their values displayed in the backlit LCDs at the top. This set-up makes for some sophisticated user configurations, which can be stored in any of 12 memory locations.

The bundled Librarian software and template scene data allow set-up on your computer, and there´s also a bundle of music-making software, including Reason Adapted and Live Lite 4 optimised for the controller.

The MicroKontrol´s usefulness will depend on whether you get on with, or even need, the mini keyboard. The potential of the percussion pads and physical controller implementation make it a tempting buy, key size notwithstanding.