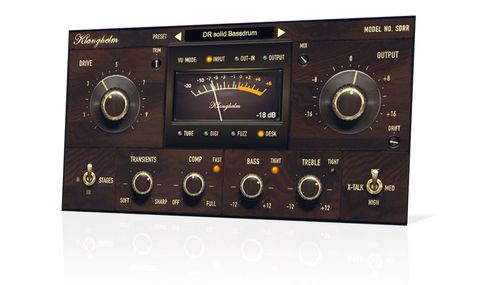 SDRR is a no-brainer! It sounds phenomenal, offers a broad range of sonic colours and is so cheap it's criminal.

Klanghelm's SDRR saturator plugin (VST/AU/RTAS) gives you control over the sound-colouring components of a range of analogue hardware-inspired processor types, letting you cook up your own sonic character from scratch.

SDRR has four basic working modes, which essentially make it four processors in one: Tube, Digi, Fuzz and Desk. While this motley quartet have several controls in common, each one has its own look and core parameter set. The one obvious mode that's missing, though, is Tape.

The primary control on the interface is the Drive knob - turn it up for more saturation and down for less. The Output knob compensates for level loss, and there's no auto-gain function attached to it. Combine Drive and Output with Input Trim (via a rather inconspicuous control) to set the optimum working gain and you're off.

A very clear central VU meter can be switched between monitoring input, output and gain change, while three degrees of crosstalk in stereo mode and up to three stages for varying degrees of colouration complete the common features.

The last feature uses a combination of serial and parallel processing to step up the complexity of the saturation, introducing transformer coupling in Desk mode. The effect on the sound is to add a thickness and richness without necessarily adding to the saturation.

Of the four modes, Tube is the most striking and probably the most useful. Applied subtly, it adds a certain warmth and glue to vocals in particular that really does hark back to analogue days of old. There are two tube models - Warm and Sizzle - which you can morph between, then adjust the Harmonic Balance and Frequency Response to hone the colour.

A Dynamic control can add aggressive or gentle attack to the saturation, and there's no reason why you wouldn't want to have SDRR inserted on every channel in Tube mode, CPU permitting. Turn up the drive on a bass guitar, say, for highly realistic classic valve distortion tones. Impressive.

Intended as a simple analogue channel strip, Desk mode provides subtle colouration plus basic dynamics and tone controls. Pushing the Drive feels just like turning up a console channel, and the EQ curves - though only bass and treble shelving - feel properly musical.

The one-knob compressor does a fine job on dynamics, aided by a Transient knob for mellow or aggressive squashing. It sounds great and, again, having one on every channel of your template session wouldn't be a ridiculous notion at all.

The last two modes - Fuzz and Digi - are more 'task-orientated'. Fuzz is modeled on the distortion characteristics of the germanium transistors in stompboxes, but it's modified for a more subtle distortion.

Having said that, it can still deliver biting tones, sounds great on basses and guitars, and is great for dirtying up synths. Digi mode is designed to precisely blend in odd and even harmonics, for enriching 'flat' sounds, but can also be used as a bitcrusher for extreme digital distortions.

Being so sonically remarkable and extraordinarily affordable, it would almost be a crime not to have SDRR in your plugin collection. In the right hands, it really can be the magic wand that blends your sounds and tones into a coherent and characterful mix, rather than simply one with a 'correct' balance.