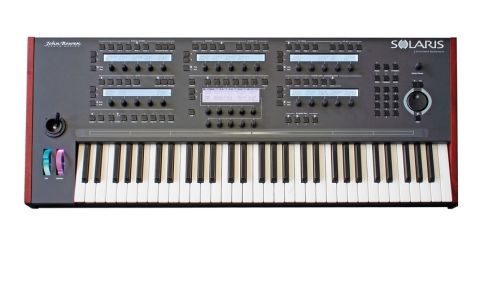 A beast of a synth with a unique pedigree, that can deliver a vast array of sound design possibilities.

Originally unveiled back in 2007, the Solaris is the physical culmination of decades of experience in synthesis design going back to John Bowen's days on the Sequential Circuits Prophet 5 and as a clinician for Moog in the early '70s.

Its sonic roots stretch back to a variety of plug-ins Bowen created for Creamware's SCOPE audio platform, and it was the designer's hope that Solaris would carry forward much of what was worthy about the development he did for that system.

Weighing in at around 15kg and stretching out to 980mm length space, Bowen's dream machine will not only carve out a significant dent in your cheque book but also a fair amount of real estate in your studio.

The Solaris is a 61-key after-touch sensitive weighted affair that features six backlit character displays designed to logically gang together groups from the synth's over 1,200 parameters. It's four multi-type oscillators, four filters, four VCAs, four mixers and four LFOs can only deliver up to 10-note polyphony due to the fact that the Solaris' rich sound is based on its internals running at 96kHz.

Bowen has added to that configuration two 'rotor' sound modules that will basically cycle through four sound sources (both internal or external) repeatedly. Six, five-stage DADSR envelope generators are also onboard as well as an eight-stage looping envelope generator. As far as effects go, the synth features chorus/ flanger, phaser, delay, and 3-band EQ, which can be run in four parallel blocks if you fancy.

Solaris also provides two vector mixers which can handle up to four sound sources that can be further modulated across both x and y axis - which leads us to note that along with the standard pitch and modulation wheels, Solaris also comes outfitted with both a joystick and a ribbon controller.

On the backside Solaris comes with more than enough ins and outs to meet most standard needs. Pedal inputs, optical S/PDIF (48kHz in/out in Master mode or 96kHz in Slave mode), 1⁄4-inch analogue out/in (eight and four respectively), MIDI (In/Out/Thru), and USB are all included.

The entirety of the machine's brains (to include its OS, samples, presets and factory patterns...) reside on a CompactFlash card that you are highly encouraged to back up. But on that tiny device you'll find an extremely useful array of emulations that you can flick through with a twist of a finger.

You can build sounds in Solaris from an oscillator modelled after the complete set of waveforms used in the Prophet VS synth, the VCOs found in the Minimoog (albeit the temperature stabilised versions), 64 authentic wavetables from the Waldorf Microwave, CEM VCOs similar to those used in the Prophet 5, as well as a MultiMode oscillator from 'standard waveshapes'. The same goes for the filter selection.

Fancy the sound of the SSM filter from the Prophet 5? Dial it in. Prefer the standard Moog ladder? Call it up. And since Solaris allows you to create four separate sounds and stack them on top of each other via the Enable Part switches above the keyboard, it's easy to see how you can build and play particularly complex sounds.

Solaris has a 16-step sequencer onboard as well as a multi-mode arpeggiator that can be transposed directly from the keyboard via an assignable switch function. To add to this heady mix, Solaris also brings to the table three insert effects that can be applied pre- or post-filter: Distortion, Decimation, and BitChop. Decimation provides serious sound warping, while BitChop actually applies bit reduction to the patch for adding cranky, old-school digital characteristics.

Toss in the fact that the four mixers on Solaris can each accept four freely assignable inputs, joystick and ribbon controllers, and what you've got is a sound design platform with seemingly inexhaustible possibilities.

Bowen's vision for Solaris was to create an efficient instrument that would embody the flexibility of an old school modular rig, but with far greater ease. And while it's not a particularly simple keyboard to master, it has other, smaller issues that should probably be wrung out of it over time.

The uneven response from the knobs beneath the displays (some feeling very tight, while others too loose and fiddly) can be annoying, particularly since the retro backlit displays can be slightly sluggish in response to parameter tweaks.

Its 10-note polyphony might put off those who are used to getting more out of an instrument at this price point. Solaris being shy on native effects is also mildly disappointing, but in the 21st century that's not particularly damning in most studio set-ups.

With so many low-cost software options available 14 years into the 21st century, most producers/musicians would probably have to check themselves before dropping four figures on a solitary piece of hardware. But there are always those who are willing to bank on top shelf kit if the creative mileage to be had is worth the price of entry.

This isn't a machine for the faint of heart, and those who are bound to see the most return on investment will likely come from the subset of users who are willing to spend the time trying to craft high unique sounds. Users who switch it on in the hopes of just running through sheaves of bass sounds will be missing the point.

You'd be better off trying to think of it as a fantastically talented musical co-conspirator that you have to invest shedloads of time in to reap their true potential.