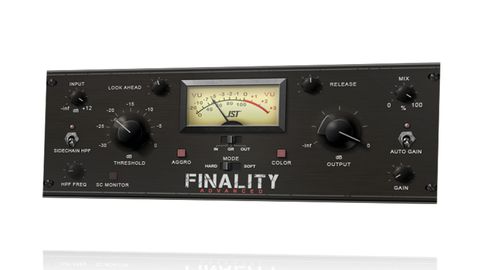 Good performance and value for money make Finality well worth checking out. Don't even think about the Lite version, though, when Advanced is just $30 more.

Joey Sturgis Tones' new offering, Finality, claims to be a highly versatile one-stop mixing limiter that differentiates itself from the competition by not only doing the business on dynamic material, such as drums, but also beefing up less dynamic signals such as guitars and vocals.

Finality comes in two versions: Lite and Advanced. The Lite model ($59) features Input, Threshold, Output and Mix controls, while for an additional $30, the Advanced version ($89) adds a variable high-pass filter on the sidechain, adjustable Look Ahead and Release controls, a choice of Hard and Soft modes, and Aggro and Color options for details of these last two.

Finality Advanced also includes an Auto Gain switch, boosting the output gain as the threshold is decreased. Finality does indeed do a good job of levelling transients on less dynamic material - the aforementioned vocals and guitars, for example.

With the Lite version, the effect is quite punchy, thanks to the fast release time, but increasing the Release time in the Advanced version can tame it somewhat.

It's on dynamic material - drums, most pertinently - that Finality really comes into its own and impresses most. As a bus limiter across a drum kit, it adds very pleasing drive and distortion, while the Mix control enables parallel compression.

The Advanced version's high-pass filter is another useful feature, although its oversensitive lower range makes it easy to wind it too high, the result being a very powerful kick drum at the expense of cymbals and snare getting lost. Used sparingly, though, it does a good of preventing the kick drum from causing any obvious pumping effects.

Switching between Hard and Soft Modes adjusts the release time of the limiter. In Soft Mode, the release is slowed down by a factor of approximately three, making the response less aggressive. In Hard Mode, the faster release time brings up the 'room', causing the sound to 'pop' more - good on more dynamic instruments such as drums and bass guitar.

Another control worthy of mention is Look Ahead, which analyses the input signal before it hits the limiter, for a more precise response.

Turn out the Lite

The Lite version of Finality is so stripped down that we just can't recommend it, even at its fairly low price. Fortunately, though, the much more effective Advanced version is only $30 more, so we'd wholeheartedly suggest going straight for that one.

Honestly, we'd rather the Lite version was axed and Finality Advanced just became Finality. With that said, Finality Advanced does live up to it's claims of versatility, performing well on a wide range of material - not just drums.

Is it the last word in limiting? No, but it is a good sounding all-rounder that holds up well against the competition, especially at its agreeable price point.