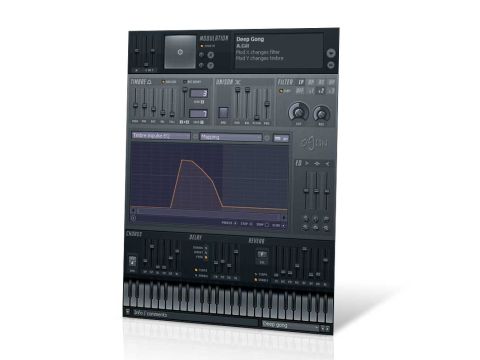 There's nothing groundbreaking about Ogun, but it's a solid additive synth that proves its mettle when put to the test.

Compact. That's the word that springs to mind when describing Ogun, the new additive synthesizer from Image-Line.

Size, though, isn't everything, and while it might not have the most mighty of interfaces, the asking price isn't going to break the bank. Fortunately, Ogun doesn't come up short on sound or features, either.

The pedigree of this instrument is clear for all to see from its design, with Ogun sharing the tight, subdued graphical interface of Image-Line's other releases. Unlike some recent offerings from the company, it's currently only available to Windows users, though it does come in both VST and FL Studio plug-in formats.

This is an instrument with a purpose: metallic and shimmering textures via a massive additive synthesis engine, without the hair-pulling befuddlement usually associated with this technology.

Additive made easy? Well, not quite. Ogun does put the heavy stuff out of the way until you need it, focussing instead on familiar functions and instant gratification via a click 'n' drag interface that encourages you to experiment.

As with all additive instruments, Ogun produces its sound by piling sine waves upon sine waves - up to 32767 of 'em, in fact! Fortunately, there's a resynthesis engine to help circumvent the tedium of the technique.

However, if you want to do the work, you can design the sounds from the ground up, clicking and dragging in the Articulation Editor, which serves as a canvas for everything from partials to envelopes.

Speaking of which, fans of the nifty multipoint envelopes found in Sytrus will be glad to see them return in Ogun. There's also the super-cool Envelope Sequencer for adding plenty of motion and vitality to your patches.

The first sound you hear after opening Ogun is, somewhat unexpectedly, a cymbal. It's a rather convincing one at that, and while it may not be the sort of glamorous opening volley one expects from a modern synth, it certainly sets the tone.

The cymbal in question is not, technically, a sampled sound, at least not in the traditional sense. Instead, this is a patch with all of the malleability one expects from a synthesizer.

Undoubtedly, it was created via the resynthesis engine, which enables any sampled sound to be analysed, broken down into harmonic parts and put back together as a synthesised waveform.

Also, Ogun can examine the harmonic content and amplitude of any sound and then apply them to a patch. While working well with metallic sounds, it's not limited to them. And, we were quite pleased with the fact that audio files can be dragged into Ogun for instant resynthesis. Sweet.

In practice, Ogun performed splendidly in all of the hosts we tried, with the exception of Sonar 8, where it exhibited some graphical dead areas. Closing and reopening the GUI cleared this up.

At $79, Ogun should do well. However, there have been a lot of similarly-priced synths released of late. Unsurprisingly, its tone tends towards cold, metallic, spiky timbres. It won't be your first call for a searing analogue lead (though such sounds could be programmed, if required). Cymbals aside, Ogun does not lend itself well to 'natural' sounds.

If anything, the sound brings to mind classic FM synths, rather than the sprawling additive instruments we've seen recently. This is by no means a bad thing, especially when you toss in the instrument's penchant for experimental soundscapery courtesy of that slick resynthesis engine.

If you want a taste of additive synthesis, but don't want to take a course in higher-level physics, Ogun has your name all over it.

Listen to three examples of Ogun in action: