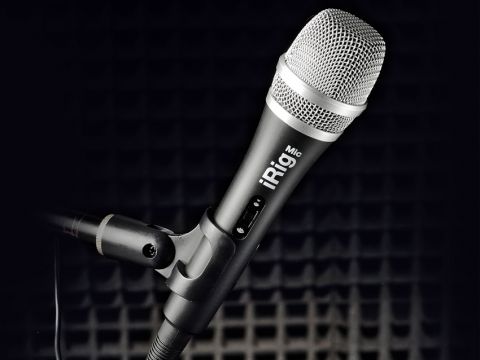 Singers, presenters and the pitch-correction-curious will all get something out of the iRig Mic.

The iRig Mic is a condenser electret microphone, with a nice, solid metal shell and grille, and built-in windshield. It comes across as a 'real' microphone, although the hard-wired cable ends in a jack plug for the iOS device headphone socket, and minijack stereo out for headphones.

Mic and the mechanics

VocaLive's setup panel covers input and output levels, feedback protection, latency, and a noise filter. Twelve effects are included - some are vocal-specific, like pitch correction, others are more 'universal', like EQ.

VocaLive imports up to 50 songs from your device's iTunes library, so they can be played at different speeds for practice sessions.

The audio recorder handles just one track unless you purchase the four-track upgrade - the examples on the DVD were recorded using this.

The mic's solid construction pays off - it's reassuringly resistant to handling noise. There's a three-way sensitivity switch, which covers a lot of ground - we used the 'Mid' one to record Sarah's vocals.

There was some hiss evident - the noise filter dealt with this, at the cost of losing some edge, however the damage was minimised by adjusting the filter sensitivity.

The workaday effects, like delay and reverb, are very usable, and the more out-there pitch effects are pretty impressive, especially for a mobile device.

Presets are stored in banks (each preset stores up to three effects), and names like Xtreme Pitch Correction and Electro Vocals should tell you what to expect. You can save and name your own banks and presets, and use the four 'favourite' buttons as shortcuts.

With background audio enabled, VocaLive runs behind other apps. You could use this for presentations, with Keynote for iPad, or at live shows, using an autocue app like iPrompt Pro.

Having said that, an integrated autocue function would be a good option, and the effect controls need to visually highlight the last one selected, so you can tell what the touch strip at the right is going to do next - that caught us out a few times.

We went on to try the mic with other apps, including FiRe, which is a very good iPhone recorder, with more practical presets - this would be a good pairing for interviews or sample collection.

iRig Mic and VocaLive don't create a studio-quality experience, but as long as you have realistic expectations about what an iApp-based setup can deliver (with a fifty-quid mic), you won't be disappointed.

This will be a great tool for practice, small gigs, and especially awesome for speech and presentation use. iOS continues to prove its place alongside serious music tools.