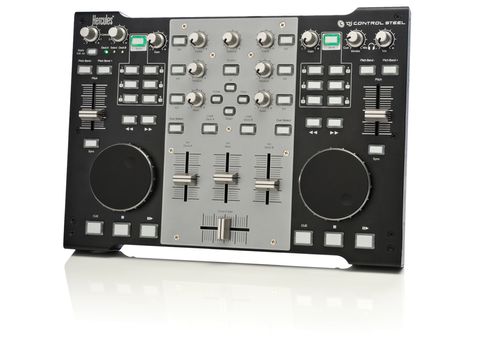 Despite its drawbacks, the no-frills DJ Control Steel succeeds thanks to rock-solid construction.

Straight out of the box, this is a different beast to Hercules' previous offerings. That's not to besmirch their past efforts, but the DJ Control Steel feels very solid indeed.

The casing is constructed like a brick privy, and the buttons and knobs feel like they could withstand a real kicking - which is precisely what DJs require.

The DJ Control Steel is clearly designed to be gigged, as it comes in its own heavy-duty carry-bag. The finish is hard-wearing and expensive-looking, and the layout is spookily symmetrical. Reassuring stuff.

As expected, it's a USB-powered MIDI controller, with two identical sets of controls. All of the usual suspects are here (transport, level, EQ and gain) plus, interestingly, kill switches.

Then there's the ubiquitous pitch control (including pitch nudge buttons), although this doesn't rate very highly for two reasons. Firstly, it's far too short to be of any real use, and secondly, it has a detent in the middle, which makes using it anywhere near the zero point impossible.

Of course, it could be argued that a pitch fader itself is redundant, since most software handles beat-matching for you (as demonstrated by the inclusion of a Sync button).

Another letdown is the woefully tiny jogwheel. It's OK for scrubbing, but so are fast forward buttons. And, despite the wheel's incredible precision, it's far too small for scratching and thus arguably useless.

On a more positive note, each channel has six assignable buttons (with a Shift button giving a total of 12 functions).

That covers the channels, but the unit also features a main volume fader, four file navigation buttons, a scratch mode button and, rather oddly, a master balance control.

All that's left, then, are a couple of assignable controllers, a crossfader, plus a cue and monitor level control. It's hardly groundbreaking, but barring the slips we've noted, it's all very well laid out.

There are templates for all the major software packages, and since it outputs MIDI, you can use the mapping and learning functions in your favourite application to configure it. DJ Control Steel also comes bundled with Virtual DJ 5 for Mac or PC, which is fine for getting started.

DJ Control Steel won't win any awards for originality, but what it does have going for it is that, for the most part, it's executed impeccably well. For most DJs, build quality is a vital consideration, and Hercules has nailed it.

It'd be great to see the company direct its obvious skills towards something more exciting next time around.