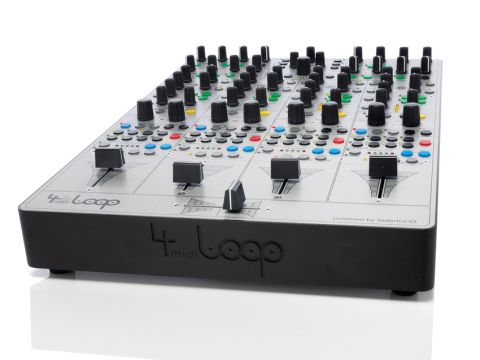 Not cheap but full four-deck-control executed flawlessly. Easy to use and beautifully built.

As a concept, the 4midiloop has been around for a while. When Traktor Pro was launched in 2008, its four-deck option raised many creative eyebrows and provided a whole new performance aspect for heaps of digital DJs.

One Traktor-adopter, Ivo Glanzmann, was particularly taken by the concept but was deterred by the lack of hands-on four-deck controllers with comprehensive internal mixer control.

He set about creating the ultimate four-deck Traktor experience, with the help of Faderfox, the boutique German manufacturers whose well-built and highly portable controllers became a standard for early Ableton Live adopters.

The concept behind 4midiloop is 'quality' - it's built from the same aluminium used in the Swiss aircraft industry and boasts the 'world's best' faders in the Pro X Fade. Removing it from the box, that premise is confirmed. It's very solid, but lighter than you might expect, without feeling empty.

The 4midiloop is probably the busiest DJ controller we've seen, and for good reason. It's designed to avoid shift-functions almost completely, meaning everything you could need to access on screen, is instantly available at your fingertips.

Considering this is the case for all four decks, while the unit is comprehensive, they've done a pretty good job of including everything while keeping the size down. It has to be said, it's not going to fit in the majority of laptop bags or even some rucksacks so make sure you check the dimensions.

Listing all of the controls would easily eat up the whole review so we'll just focus on the important parts. The faders do indeed feel solid, responsive and smooth to use. As a nice bonus, their curves can be adjusted using the System Mode, where you can also change MIDI channels.

Each channel has its own transport and sync section where cueing, playing, syncing and bending is taken care of. There's also a nice Phase Meter LED that indicates when your track starts to drift out of sync. While this is a nifty addition, with only four LEDs, it's very much a reference rather than a fine-tuning device.

The Hot Cue section is one of the few places Shift comes into the equation, but you only really need to use it if you're creating markers on the fly.

There are no jog wheels on the 4midiloop for obvious reasons, something that may deter some users. Bearing in mind that the 4midiloop also lacks a soundcard - only a single USB port makes up on the back panel - all indications point towards use with Traktor Scratch.

However, there is some basic seek functionality in the form of a Seek/Scratch knob. While this isn't exactly very glamorous, it works surprisingly well and while playing some less snap-friendly tracks, it was put to great use.

This is kind of the general consensus with the 4midiloop - simplicity. Ease of use was going to have to be a priority for such a busy controller and, against the odds, you'll find yourself at one with the 4midiloop in no time at all.

The colour coding effortlessly guides you to where you need to be and every component is of such high quality, your creative flow is never interrupted by a loose knob or a dodgy button. Speaking of which, despite the deep inset, the proximity to each other and similarity, not once did we hit the wrong one.

4midiloop's EQ section is based on the four-band setup and each one has a kill, something we missed on NI's Kontrol S4. Everyone's favourite one-knob filter makes an appearance, again favouring the S4 with an on-off button rather than having to make your way back to 0º for the drop.

All of this leans heavily towards a traditional mixer. What makes it feel even more so is the lack of endless knobs. It's a subjective thing, but we've never been a fan of endless rotaries and much prefer taking our chances with 270º knobs and relative MIDI mapping. Aside from the Seek/Scratch and Browser knobs, it's a 270-affair, and the 4midiloop is definitely all the better for it.

The effects section is one of the biggest pulls of the 4midiloop with all four sections given heaps of space and a clear layout. Thanks to this, the effects feel like part of the hardware, and once you set up your favourites, you won't need to look at the screen again.

Finally, clicking down the Browser knob will switch to Browser Preview and turning it will scroll through your library. Good thing too, as running four decks on a standard 13-inch laptop gives you little-to-no room for track selection.

Let's cut to the chase - forgetting the build quality, ease of use and genuine uniqueness of the 4midiloop, you are paying over a grand for a controller with no soundcard.

Putting it up against Native's Kontrol S4 - which it will inevitably be compared to - the S4's jog wheels, slightly smaller booth footprint, built-in soundcard, sampling triggers, NI-endorsement and four-hundred Euro saving means it's tough competition but also not a fair comparison.

The 4midiloop isn't trying to drag you away from the S4 - it's a totally different concept. This is complete four-deck control, executed almost to perfection. If you don't need four decks, and we stress 'need', you'll more than likely scoff at the price tag.

But it's the self-contained, high quality and hands-on approach that makes the 4midiloop literally one of a kind. If you're playing four-four House or Techno and jog wheels aren't a priority, the 4midiloop is worth pushing your budget for.