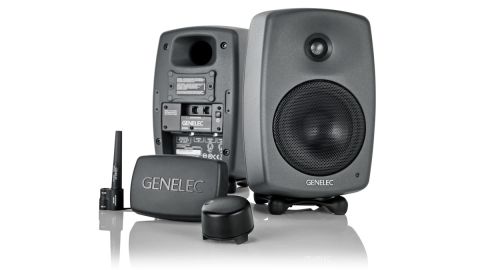 Genelec's all in one monitoring package offers all you need for monitoring nirvana.

When Genelec launched its Smart Active Monitoring system, it brought together its previous DSP-equipped monitors under one umbrella - SAM.

But with the cheapest monitors (8240A) priced at around £2,000 a pair, the system remained out of reach for many. With the arrival of the 8320A and 8330A this has been rectified somewhat, and there's also an updated version of the associated Genelec Loudspeaker Management software (GLM 2.0).

Its longstanding 'analogue' range of monitors, which includes the 8010, 8020, 8030, and so on, continues to be available and you'll spot from some of the product naming (8020C for example), that they've been incrementally revised over time.

These monitors include integrated amplification and regular dip switch based audio filters, which allow manual adjustment of monitor response to better match positioning and room acoustics.

In contrast, Smart Active Monitors use a DSP based approach to frequency adjustment, and this is coupled with room analysis and level control via their GLM software.

The 8320A and 8330A are 4-inch and 5-inch woofer designs respectively, with identical 3/4-inch metal dome tweeters.

Onboard twin amplification is Class D and is also identical on both models, delivering a maximum power output of 50W to both woofer and tweeter. They include Genelec's Intelligent Signal Sensing (ISS) system, which means low power consumption in standby mode and signal sensing autostart.

Both models have analogue input on XLR, with the 8330A also including AES digital connectivity and pass through on a pair of XLRs. For GLM control each monitor has a pair of RJ45 ethernet connectors allowing primary connection and onward daisy-chain linking.

There's a rear mounted soft power switch, which doubles as a factory setting reset when held for ten seconds. Finally the three-colour front panel LED indicates the speaker's status and ties in with the colour coding within the GLM software.

There's also a new subwoofer, the 7350, which we didn't have for review. This has an 8-inch driver, 150 Watt amplifier and uses Genelec's Laminar Spiral Enclosure (LSE).

Both new models come bundled as pairs and the bundle includes the GLM Adapter Kit, which you'll need to make the most of their capabilities. Nevertheless, single monitors can also be purchased should you want a surround set-up.

As mentioned, a key ingredient here is the GLM Adapter Kit and, although the monitors are designed to store their DSP settings so they can be used in isolation, for filter set-up and calibration you'll need to hook them up to your computer.

The Network Adapter is a bit like a control hub, with USB to your computer, ethernet to one speaker (which is then daisy-chained to the next) and mini jack for the wired volume control. There's also an input for the calibration mic.

In use, both the 8320A and 8330A exhibit the typical Genelec sound. This means very clear top-end and good articulation but not particularly forward mid range. In the low-end, the reflex design provides plenty of punch, but quite understandably the larger 8330A has better low frequency extension, and is therefore much more use for mixing.

Bear in mind, neither monitor is particularly large, and in both cases a sub would be a good addition if you like to really dig in with your EQ. The integrated Iso-Pod remains a genius bit of kit and really helps angle the speakers in awkward spaces. Equally, if space is tight, the 8320A really is super compact.

Initially we tried running both monitors completely flat, without the GLM correction. Positioned away from rear and side walls, they sounded surprisingly workable. Nevertheless, the whole purpose of the SAM system is to improve on 'workable', and both single and multipoint analyses revealed a number of peaks that could be reduced.

It's worth saying that this sort of correction system can only notch out resonant peaks. Nulls of course can't be tackled, as boosting the corresponding frequencies to compensate would make things worse. Even so, it was useful to see the analysis curve pick up a couple of low frequency nulls in my studio.

Also on the upside, the filters themselves sounded smooth with no unpleasant artifacts, and we really couldn't tell there was an extra layer of corrective EQ between the mix buss and the monitor output.

So, any gripes? First, we wish Genelec would include a TRS jack input as well as the XLR. Next, although it's nice having onscreen monitor controls and a hardware volume control, responsiveness and convenience is still not on a par with dedicated analogue controls. What's more, we found ourselves hankering for an integrated push button mute on the volume control. Finally, minimal additive gain on the shelving filters would be handy.

These points aside, however, these are excellent packages and, although they're not cheap, you get lots of functionality.